Twitter announced this morning a new feature: the ability to retweet or quote tweet yourself. The company encouraged users to “pick an old favourite and give it a try!” 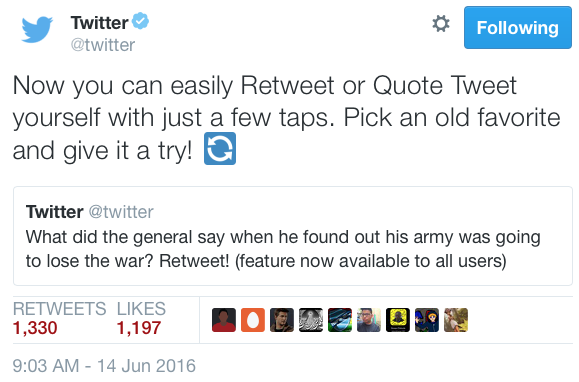 The feature will appeal to the narcissists out there and flood your timeline with people retweeting themselves endlessly (those jerks).

While most users applauded this feature, many also demanded an edit button for tweets, too. Users will be able to undo their retweets though.

Last month, Twitter made changes to no longer count usernames and attachments into 140 character limits.

If you thought OpenAI's ChatGPT is impressive, wait till you see what Google has been working on — if the company lets you, that is. Among Google's many endeavours in artificial intelligence (AI) and machine learning is MusicLM, a model the company created to generate original music from rich text prompts (via TechCrunch). Google researchers...
Nehal Malik
47 seconds ago