Users of Twitter’s mobile apps for iOS and Android are seeing an option popping up allowing users to mute people, as noted by The Verge.

Once you mute someone, you won’t see their tweets until you unmute them. This is handy if you’re following someone and they tend to post spoilers when it comes to sports or TV shows. Just mute them and say good bye. 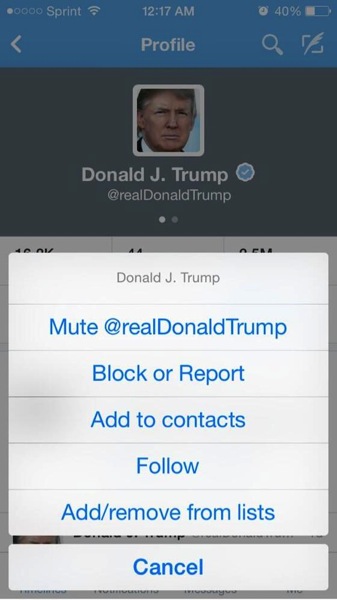 Is muting someone a new twitter app feature? pic.twitter.com/YjIdDqm7H7

The ability to mute isn’t new, as users of Tweetdeck and Tweetbot have had various options to do so for a while now. Tweetbot’s mute feature allows you to mute a person for a period of time, which comes in handy if someone is live-tweeting an event that might contain spoilers (or it’s just plain annoying).

The mute feature is rolling out sporadically to users; we haven’t seen it yet over here (we rarely use the official Twitter iOS app) yet but if you do, let us know about it in the comments.