A new Apple patent shows that the Cupertino company is researching a future product that might allow connecting two iPads or iPhones as a single workstation or notebook. 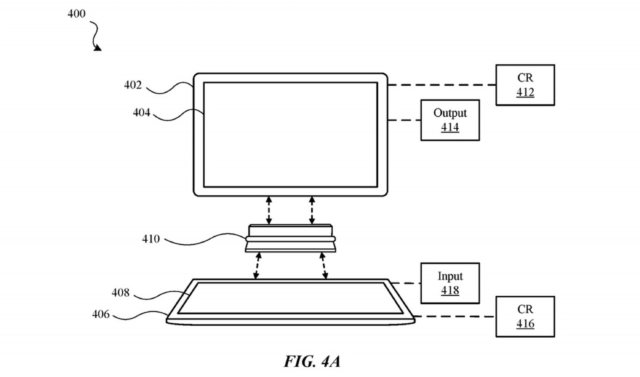 We’ve already seen patents that have Apple creating some sort of keyboard that replaces physical keys with a glass surface, similar to that of an iPad. But now there’s a new patent that goes one step further by making another iPad the keyboard. Two iPads, one screen, one keyboard, one kind-of-notebook, kind of thing.

The patent, called “Modular multiple display electronic devices,” shows a small device foldable device that attaches to both iPads or iPhones via a connector. This device will enable connectivity between both iOS devices, allowing them to transfer data seamlessly between each other, and work as a single device. The patent describes various use cases, one of which includes using an iPad or iPhone as a keyboard with a Touch Bar. 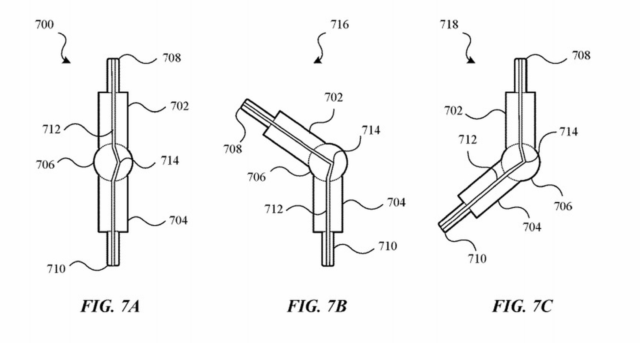 Interestingly, as Apple Insider notes, it doesn’t seem to be a requirement that both devices be the same size. That could potentially suggest the potential for an iPad to be used as an iPhone keyboard and vice-versa:

The concept does not necessarily rely on using two similarly-sized mobile devices, as it is feasible to use a smaller display of an iPhone as the main screen while an iPad could be the secondary lower device. Such an orientation would be required as it would be easier to type on a larger surface like an iPad with both hands, as well as the weight of the device itself reducing any unsteadiness of reversing the two positions.

What’s possibly even more interesting is what processor and OS will these configurations support. Apple’s iPadOS would be the most logical, to be sure, but over time with Apple Silicon, that could change. Apple could technically create a new modular system using a hybrid processor that could run MacOS for enterprise or professional users.

The idea of having a device that’s essentially two screens connected isn’t a new one and Microsoft has been exploring it for years. But Apple has yet to go that route, instead preferring to focus on offering traditional accessories that connect to screens and devices like iPads.