Neil Mann, a 39-year-old Uber driver from Ottawa, was forced to become a passenger in his own vehicle after he was stopped by a police officer on Highway 417. According to the Ottawa Citizen, Mann wasn’t aware that he was driving with a suspended license for not paying a $110 ticket he had received in January for having an unreadable license plate. 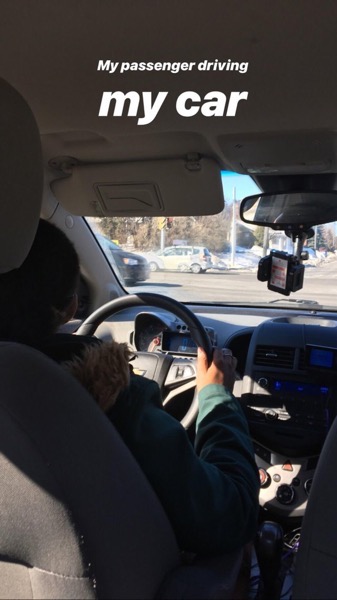 On Sunday, when a police car equipped with an automated license plate reader pulled Mann over, he found out that his license had been suspended less than a week ago. According to officials with Ottawa Police Services, any ticket issued to a motorist in Ontario will result in a license suspension if it is not paid.

He was then told that he couldn’t proceed with the ride so he could either have his car towed to a destination of his choosing or find someone else to drive his car for him:

“The passenger and I hadn’t talked at all. She was in the back seat listening to her headphones. She just jumped right up and said, ‘I’ll drive!,’ ” Mann said. “(The police officer) checked her out and she was good to go.”

Mann’s fare became his saviour, shuttling him to a nearby Service Ontario so he could pay his outstanding ticket, plus a $275 fee to have his license reinstated. “She said, ‘It’s okay, I don’t have to go to work for a couple hours,’ ” he said. “At the end of it … we hugged it out and I took some selfies and some video. It was a pretty interesting 90 minutes.”

Mann said that this was one of the most intriguing situations he’s ever been involved in as an Uber driver.