The City of Toronto has issued Uber a license to operate in Toronto, making the latter the first to receive a Private Transportation Company (PTC) designation. Council voted in May to legalize Uber after passing new Vehicle-for-Hire bylaws, which came into effect on July 15th.

Tracey Cook, Executive Director of Municipal Licensing and Standards for the City of Toronto, said at a press conference yesterday “It’s the first licence issued to Uber in Canada.”

Uber spokesperson Susie Heath told CBC News the licence “comes as a result of cooperating with the City of Toronto as they work to implement the new city bylaw.”

The process means Uber will forward driver information to city officials, who will then screen drivers and issue licenses, with 12,000 expected to be completed by September. PTC bylaws state cars on the road cannot be older than seven years, a decision which has reduced Uber’s driver base by about 30 per cent.

Taxi drivers in Toronto aren’t happy about the move and staged a protest this morning at East York Civic Centre, with one sign saying “Taxi Lives Matter”. 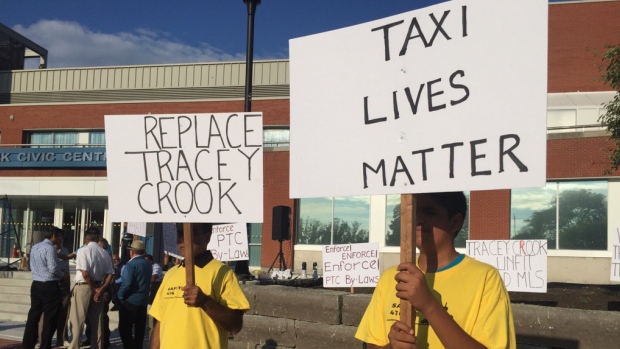 Paul Sekhon, president of the United Taxi Workers Association, said yesterday “It’s a political stunt, hoping that out of shame we won’t do the protest anymore,” adding existing UberX drivers should be off the road until their city licenses are granted.

At this morning’s protest, he said “They should have respect for us,” saying “We’re here to do a full time job and provide food and put it on the table for our families.” Sekhon took shots at casual Uber drivers, driving as secondary jobs, saying they were “jokers”.

Many taxi drivers in attendance called for Cook to resign, over the way Uber has been handled in the city. This morning’s protest was peaceful and no roads were blocked.

Uber allows smartphone users to order and pay for a taxi through an app, which shows where your driver is in real-time. UberX allows drivers to shuttle passengers in their private vehicles, versus a traditional taxi cab.

Quora has just opened public access to its AI chatbot ‘Poe,’ which lets people ask questions, get instant answers, and have back-and-forth conversations. Poe allows users to ask questions from a range of AI chatbots, including those from ChatGPT maker OpenAI, as well as other companies like Anthropic. Quora’s chatbot is currently available on iOS, but...
Usman Qureshi
10 mins ago

Apple has just rolled out a redesign for its official website, introducing an all-new navigation bar with fancy drop-down menus on both desktop and mobile. As spotted by Parker Ortolani, the updated drop-down bar makes it easier to navigate the website and relatively faster to get to individual product pages. All-new https://t.co/pXaoM71lcY nav bar with...
Usman Qureshi
42 mins ago

According to leaker @Jioriku, Apple will soon launch the Beats Fit Pro wireless earphones in Volt Yellow, Coral Pink, and Tidal Blue colours. Although Apple is yet to make an official announcement, MacRumors claims to have spotted listings for the new colours on some Apple reseller websites in Europe. Similar to the AirPods Pro, the...
Usman Qureshi
60 mins ago