Following a new survey of prospective smartphone buyers conducted by the UBS Evidence Lab, the results of which forecast a favourable share of the iPhone 6 Plus sales and strong demand for the device in China, the investment firm’s analyst Steven Milunovich has increased his price target on shares of AAPL to $125, up from his previous projection of $115, AppleInsider reports. 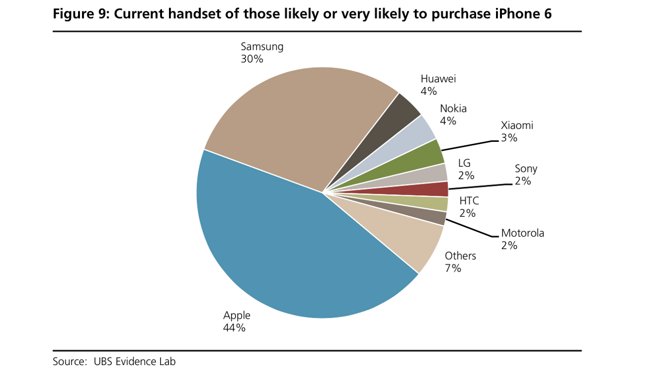 “Respondents also indicated they are most likely to buy the 64-gigabyte version of the iPhone, which along with high demand for the iPhone 6 Plus could help grow the average selling price. The survey also found that almost one-third of interested iPhone buyers currently own Samsung phones. As a result, Milunovich believes the iPhone 6 upgrade cycle could bring about significant share gains for Apple, as users switch from Android devices to iOS. And those who do switch are highly likely to stay — even in China. The survey found that Apple has the highest overall retention rate of 84 percent, which is twice that of Samsung or Xiaomi.”.

The survey also found that over 70% of iPhone 6 buyers say they are at least somewhat likely to use Apple Pay.