UGO Wallet is a venture from PC Financial and TD Canada Trust, which aims to become another mobile wallet for Canadians. Today, the company has announced the launch of Host Card Emulation (HCE) support and adoption of Visa’s tokenization technology for its Android app.

HCE, which essentially allows software to emulate a payment card, debuted in Android KitKat 4.4, while tokenization creates a one-time use number to represent your credit card at NFC terminals, making it safer for contactless payments.

This means Android users can now use TD Visa credit cards to tap and pay at contactless terminals, according to Alec Morley, CEO of UGO. “By adopting these technologies we have improved the customer experience – making it easier and faster – when loading TD Visa credit cards into the UGO Wallet app,” adding “This move also enables us to extend secure mobile payment functionality to more customers on more devices.”

Android devices running version 4.4 or higher can now use encrypted tokens when paying with their TD Visa at contactless terminals using UGO Wallet, which now comes with a widget for faster one-touch payments. This launch means Android devices on any carrier can use UGO Wallet, as long as they are running 4.4 and have a TD Visa. 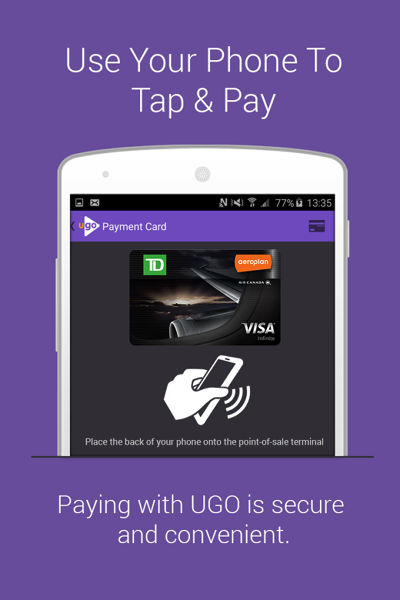 As for UGO Wallet on iOS, there are limitations on being able to access the iPhone’s NFC chip, so for now, the app is primarily a loyalty card and gift card app. Back in February, the iOS version added peer-to-peer money transfers with UGO Pay.

TD Canada Trust is set to launch support for Apple Pay in mid-June (along with Scotiabank and BMO), which cannot come any sooner. In the meantime, if you know someone with a TD Visa and an Android device on 4.4, they can start tapping to pay with UGO Wallet. It’s always good to know how mobile payments are evolving in Canada from our banks.