Today I received my new Apple TV and Iâ€™m lucky enough to do an un-boxing for you.Â  I had ordered the Apple TV online from the Apple Store on Sept. 1st.Â  It finally shipped from Shenzhen China via FedEx on Sept. 27th and arrived at my doorstep in Windsor Ontario on Sept. 30th. 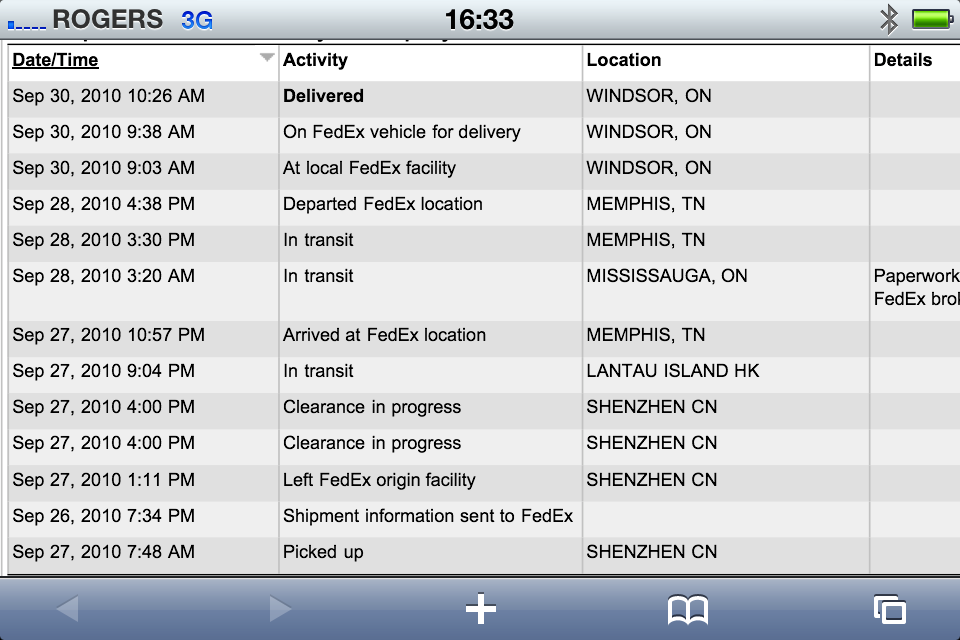 In typical Apple fashion the unit was shipped in a non-descript, well packaged brown box.Â  My iPhone 4 and Airport Express are included for reference in the following pictures. 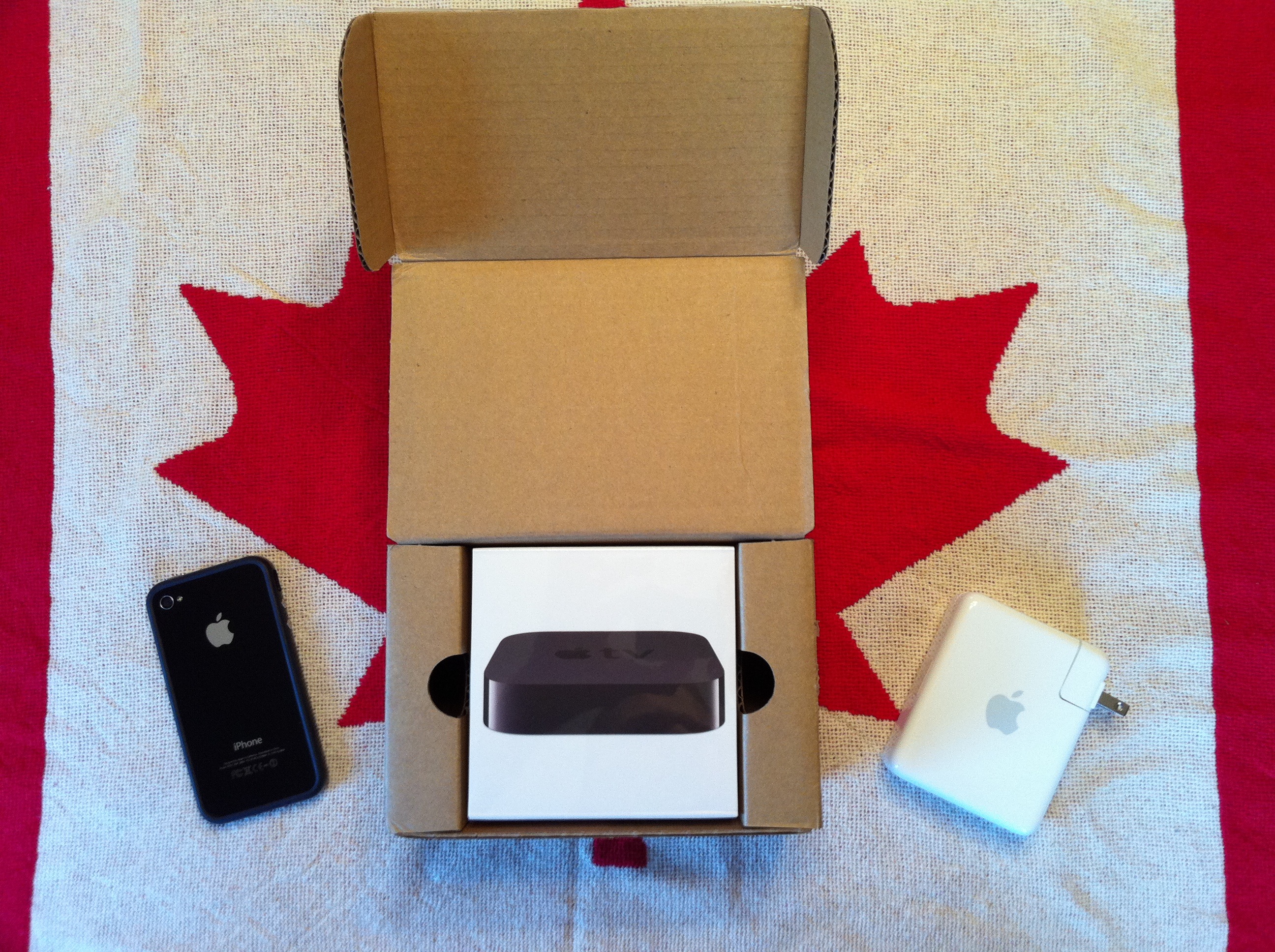 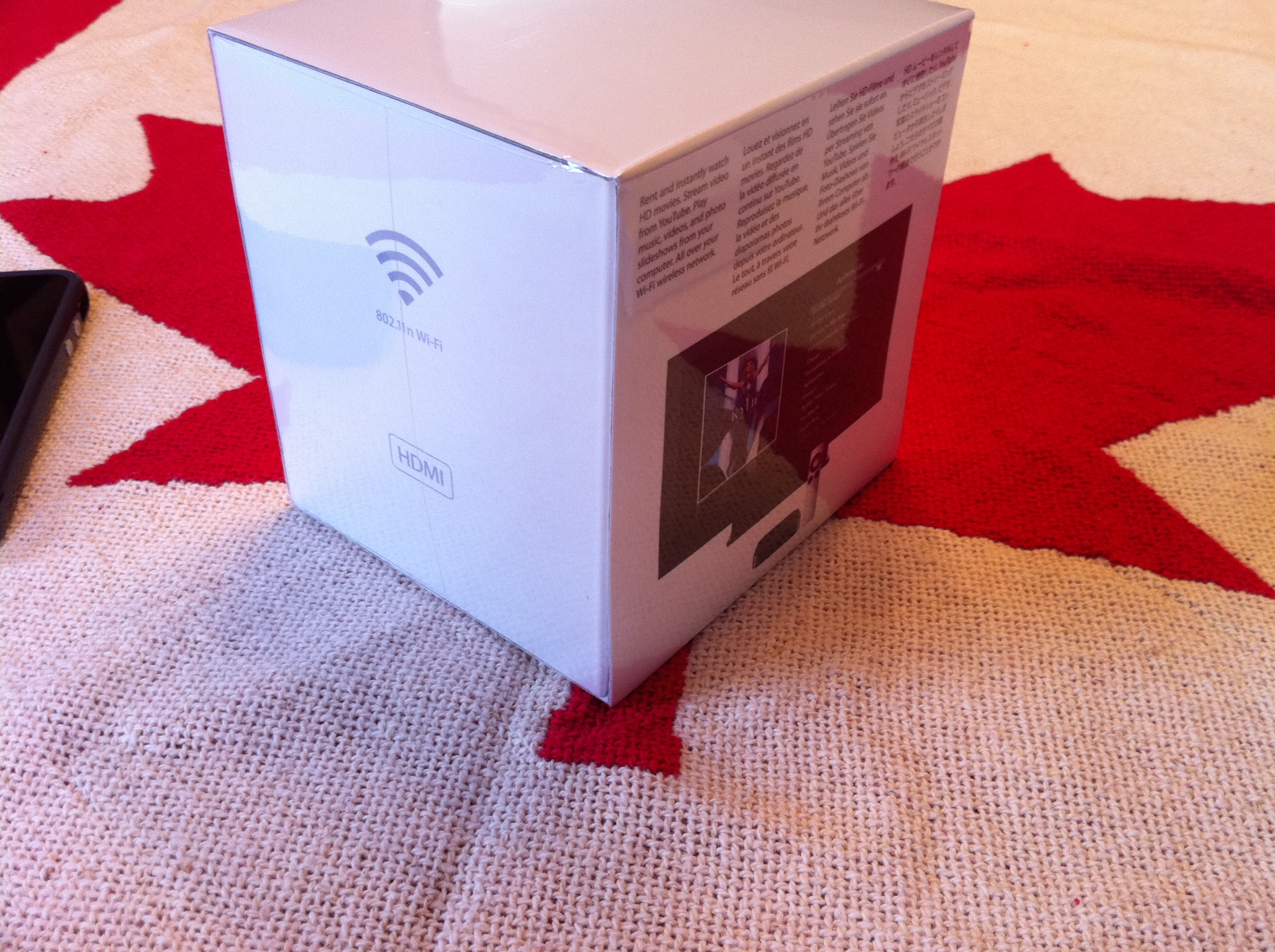 Taking off the plastic outer wrapping allows the box cover to slide the open revealing a shiny new Apple TV. 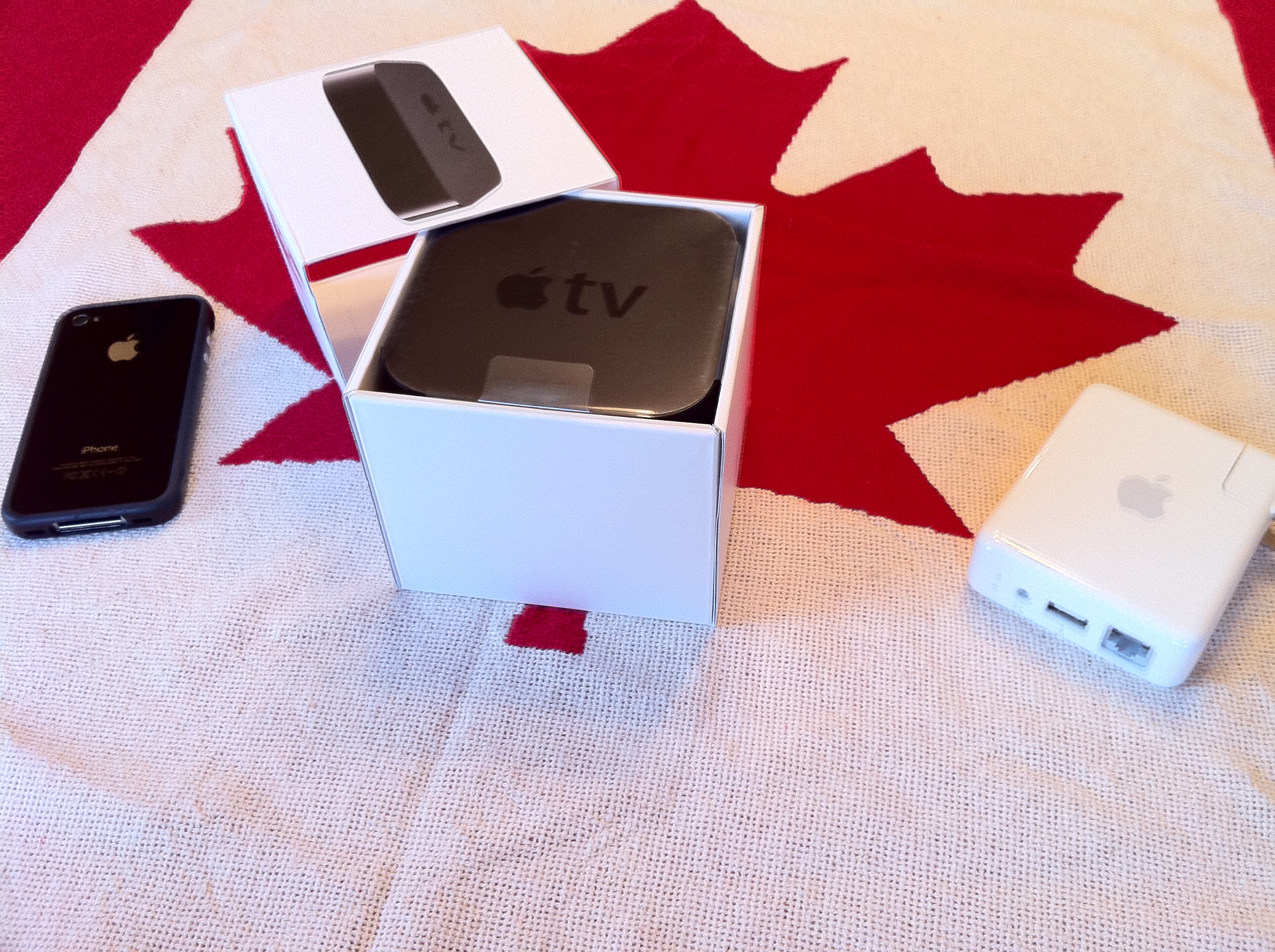 Lifting the Apple TV out of its box reveals a plastic wrapped aluminum bodied remote control. 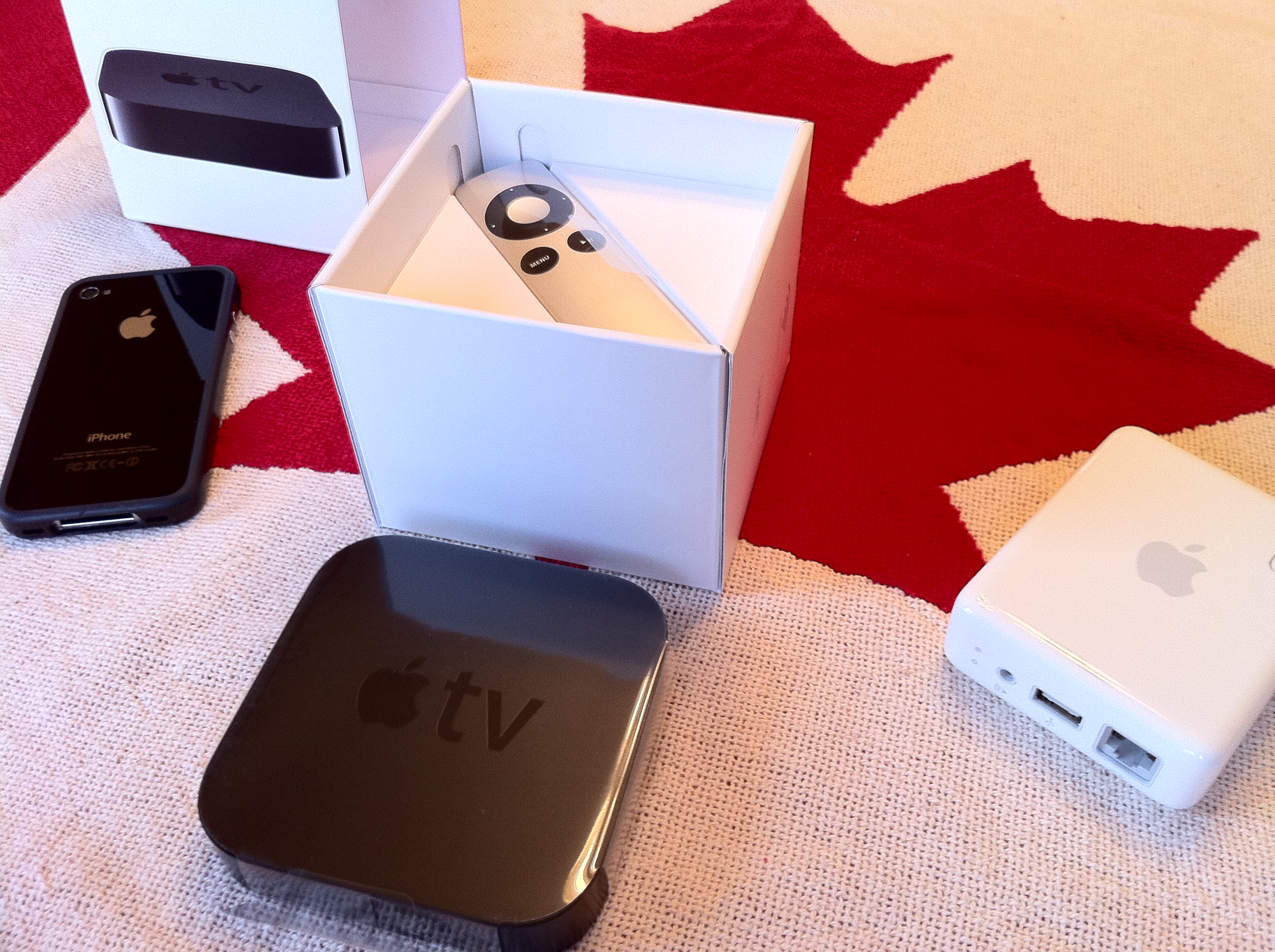 Below the cardboard insert holding the remote control is the power cable, manuals and the usual Apple Logo stickers.Â  With all that packed into the box its no wonder that the box is as deep as it is. 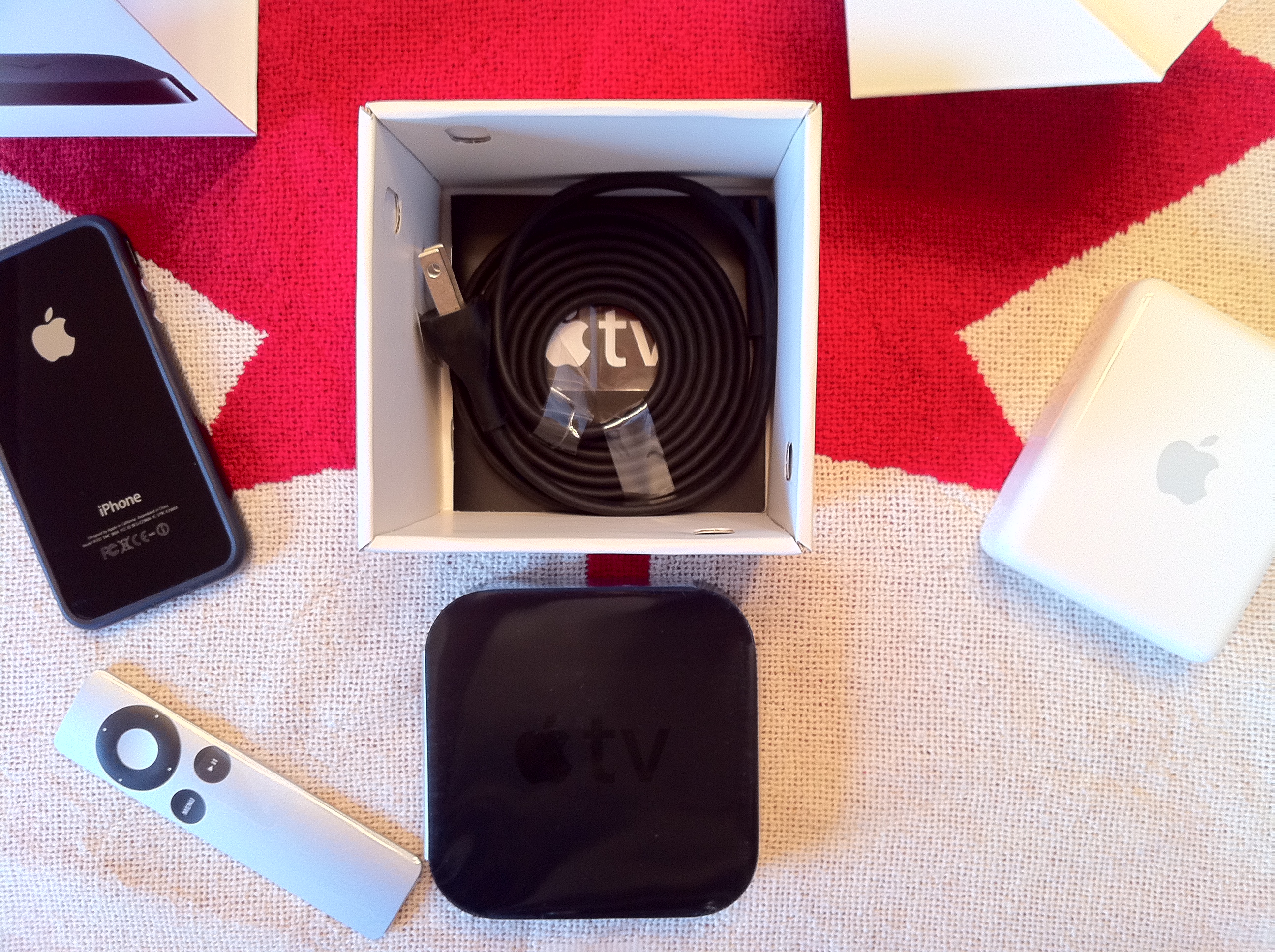 The Apple TV is wrapped in clear plastic to protect its outer surfaces. 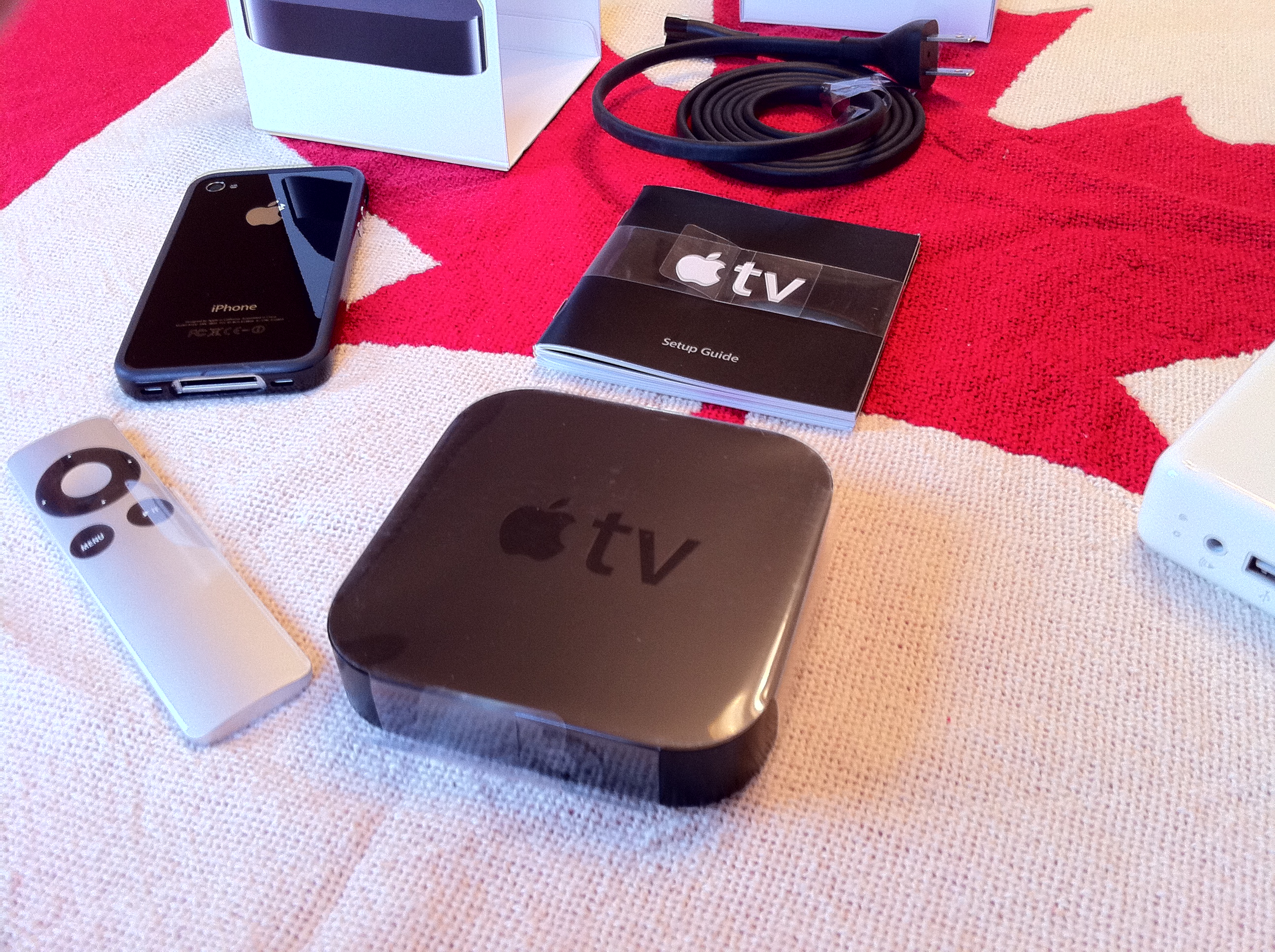 There is a strip of black plastic the goes around the edges of the Apple TV to cover the power plug and the HDMI, optical Audio, mini-USB and Ethernet ports. 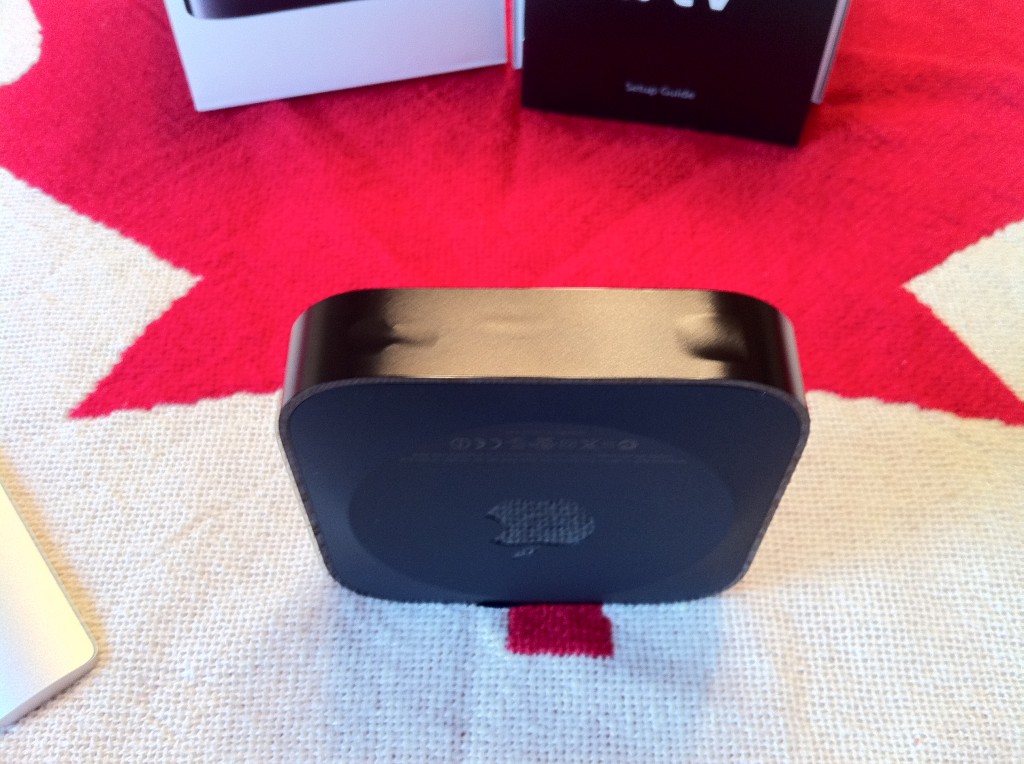 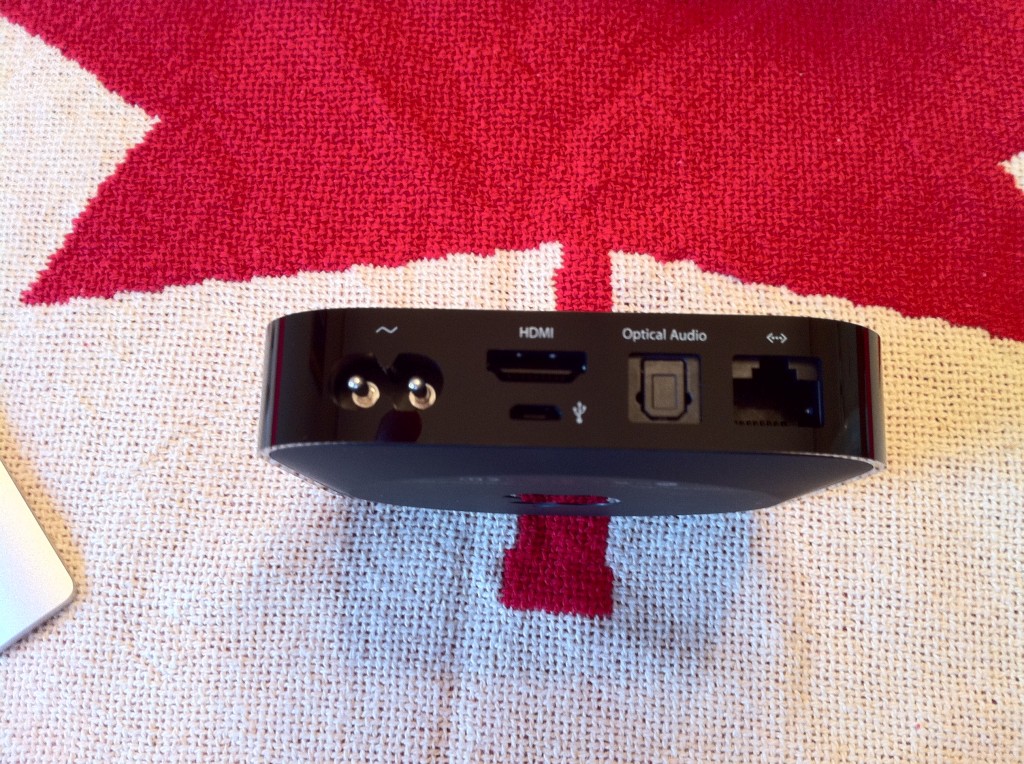 The bottom of the Apple TV sports the Apple logo and feels somewhat rubbery, designed not to scratch anything it sits on and to prevent the unit from sliding around.Â  The new Apple TV is not as heavy as I expected it to be. 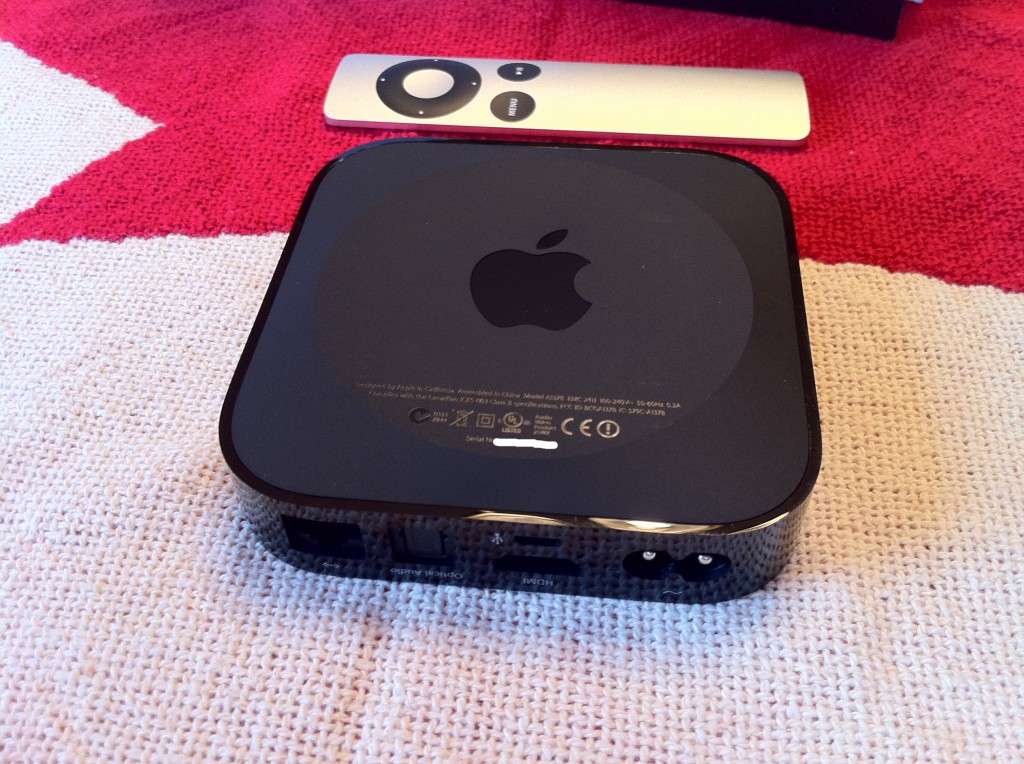 I connected my HDMI cable from the Apple TV to my plasma television and then selected the TV’s HDMI input corresponding to the Apple TV.Â  Then I plugged in the power cable and noticed a small white LED begin to flash on the front of the Apple TV. Â Note in the picture below the relative size of my Elgato Eye-TV (on the left) which I use to record OTA HDTV programming on my MacBook Pro compared to the new Apple TV. 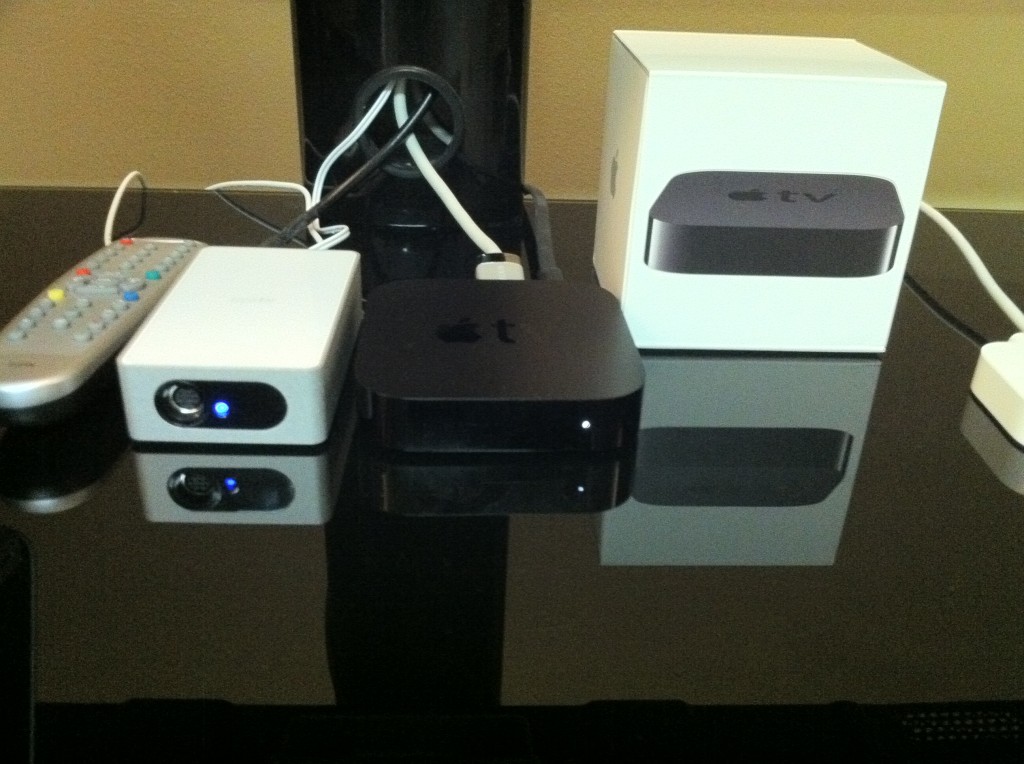 Soon the Apple TV logo appears and you are prompted to select a language. 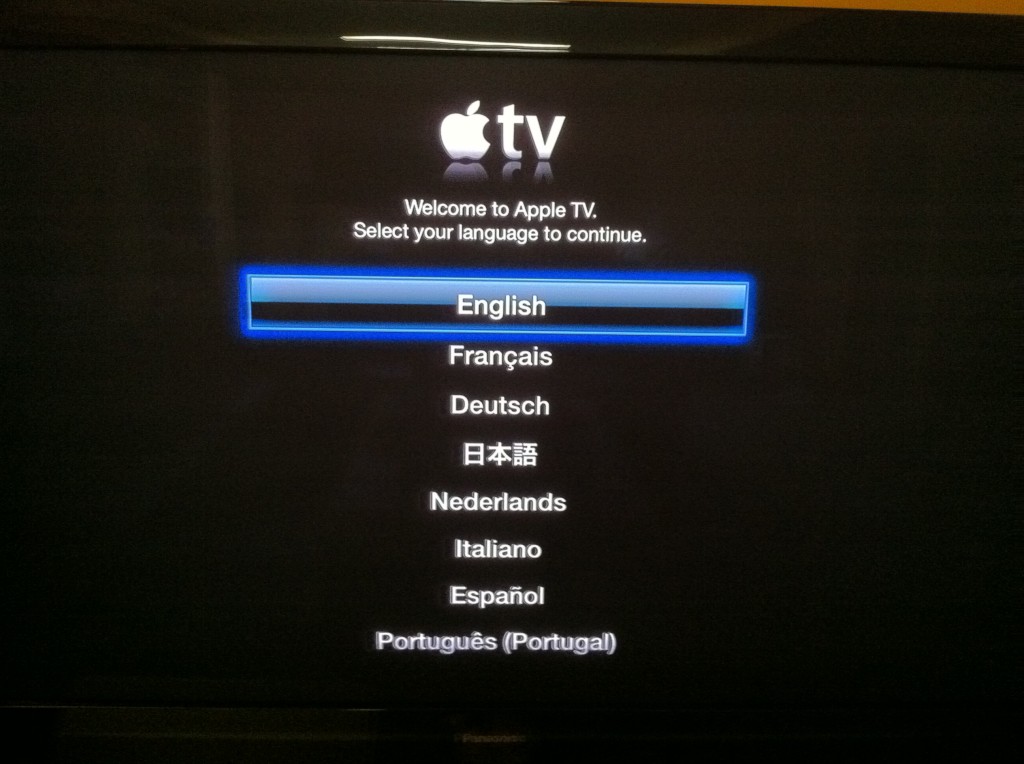 Once selected it begins a network setup wizard.Â  I had some difficulty here with Wi-Fi setup for two reasons;Â  #1 – I forgot that I set up my Apple Time Capsule to only allow devices whose MAC addresses I set up, and #2 – My Time Capsule is set up so that it does not broadcast the wireless network’s name.Â  So in my excitement, I kept entering the network name incorrectly.Â  If you did not set up your router in these two ways, you will probably have no problem setting up your Apple TV over a Wi-Fi network whatsoever.Â  In my experience Apple’s products always work right out of the box, and always work great together. 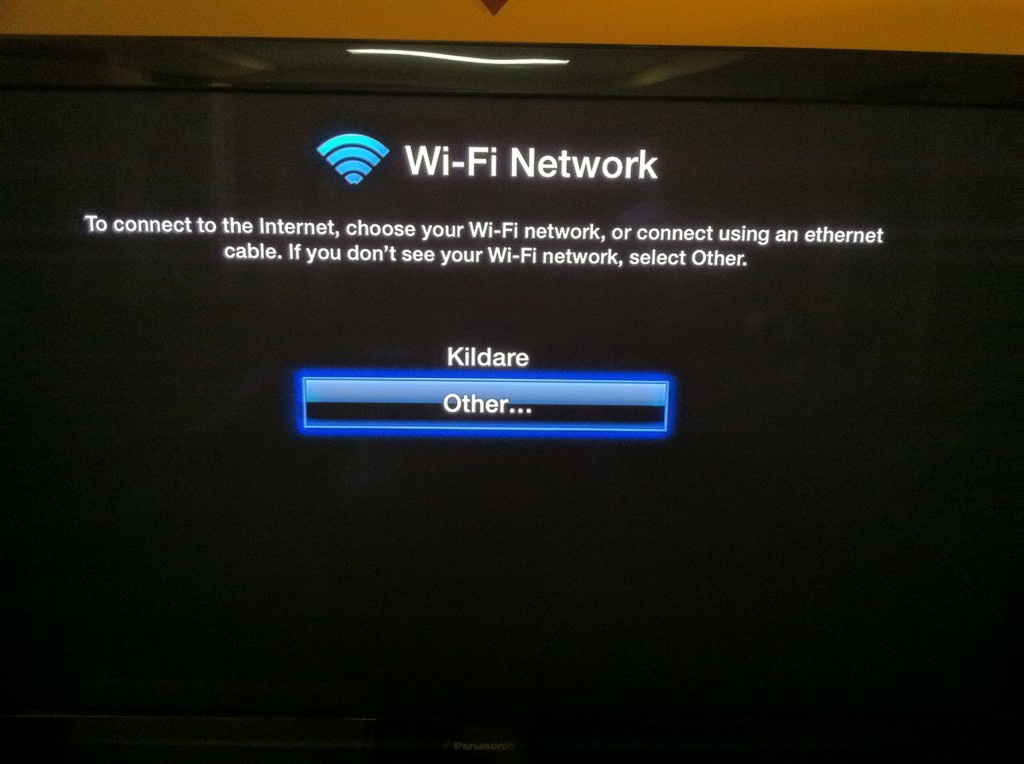 Next you can set up your Apple ID to connect with iTunes and turn on Home-Sharing to share your iTunes libraries. Â The first Internet-based account I set up was Netflix.Â  It accessed Netflix.ca without me telling it to and had all my recommendations that have been created during my 1 month Netflix free trial period.Â  Thereâ€™s also access to and account set-ups for YouTube, Podcasts (via iTunes), MobileMe, Flickr, and Radio. 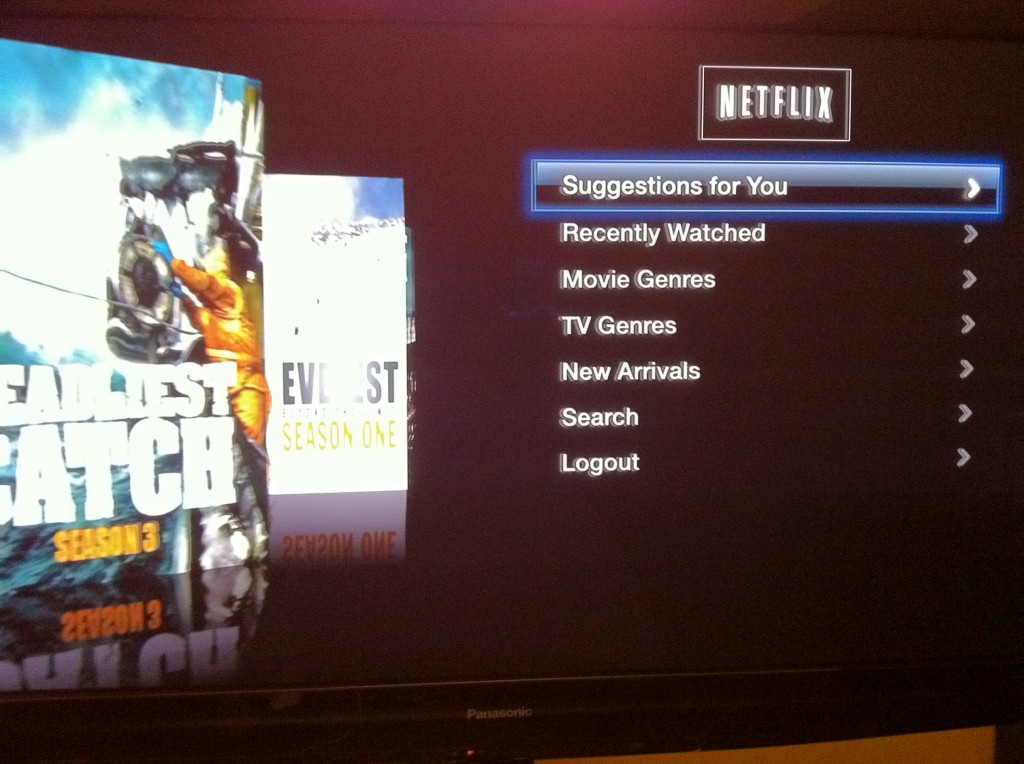 One thing that was a minor annoyance for me was entering my account’s user names and passwords by scrolling the blue ‘cursor’ box back and forth using the remote control.Â  I wish there was a way to plug in a keyboard or be able to use the Apple wireless Bluetooth keyboard for this, but I suppose that setting up the accounts is pretty much a one-time affair. 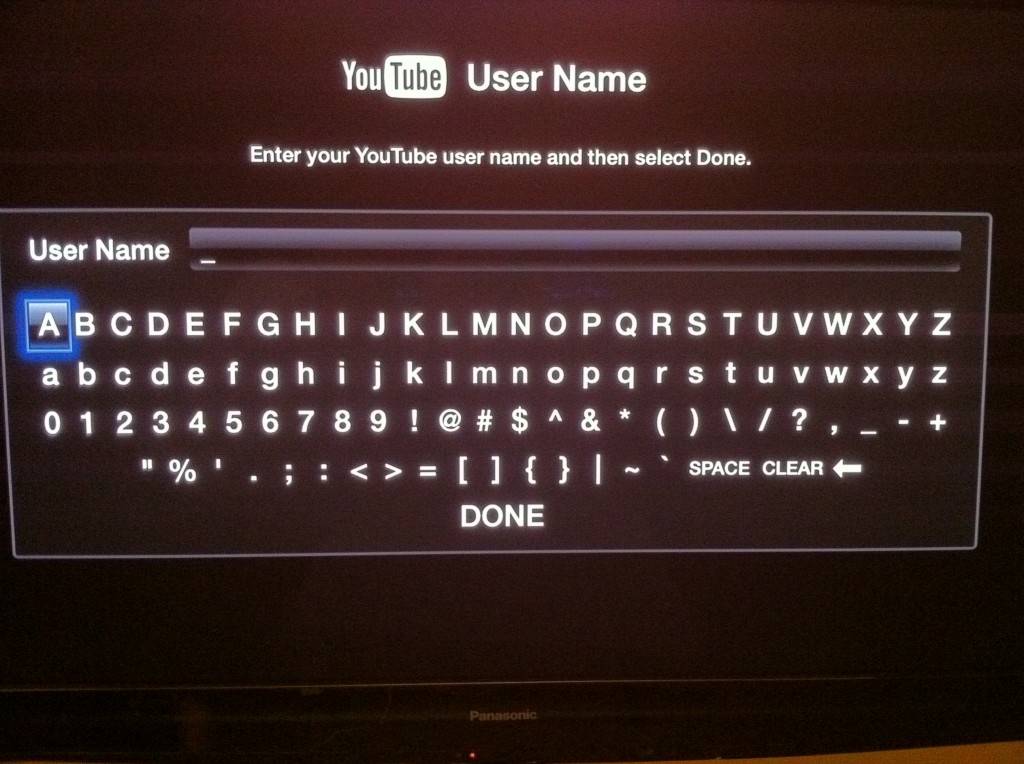 After watching Man Vs. Wild via Netflix for almost an hour I had forgotten that I was actually streaming content over the web.Â  Playback was exceptional but I would bet this depends upon your ISPâ€™s Internet connection.Â  I felt the outside of the Apple TV to check how hot is was and to my surprise it was only slightly warm, just above room temperature.Â  My Elgato Eye-TV gets almost too hot to the touch after a while so this was a pleasant surprise. To learn more about Apple TV click here.

So far I am impressed with the new Apple TV and look forward to putting it through its paces. Â Itâ€™s a great alternative to having my MacBook Pro physically connected to my TV all the time to throw Netflix shows on my plasma. Â Lucky for us Apple priced the new Apple TV at a price point where you could have one for each TV.