unc0ver 5.0 Jailbreak to Support Every Signed Version of iOS, Including iOS 13.5

The unc0ver jailbreak team has announced that an upcoming unc0ver 5 release will support jailbreaking every signed iOS version on every device. 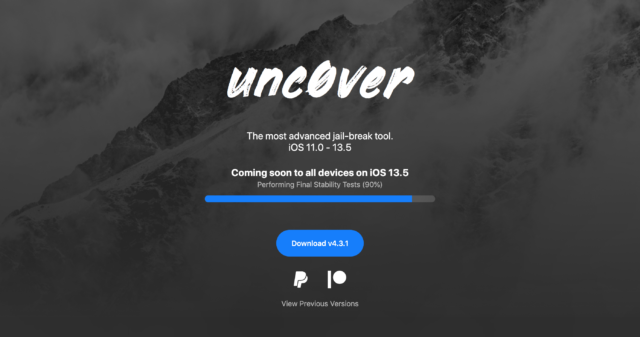 The Unc0ver team today took to Twitter to announce that they are soon going to release unc0ver 5.0 that will support jailbreaking every signed iOS version on any iPhone or iPad using a 0-day kernel vulnerability, meaning that the upcoming release of Unc0ver will also be able to jailbreak the recently released iOS 13.5.

The security vulnerability that unc0ver 5.0.0 will be using was discovered by Pwn20wnd, who is popular for discovering iOS vulnerabilities. Because of this, unc0ver team asked users to go ahead and update their devices to iOS 13.5, instead of staying with their current operating system version because of a jailbreak.

We are going to release #unc0ver 5.0.0 with support for every signed iOS version on every device using a 0day kernel vulnerability from @Pwn20wnd in sponsorship with https://t.co/l4SDOTDUla very soon. Update your devices to 13.5 and follow our progress on https://t.co/cNIUANaJr2.

A benefit of using unc0ver is that it is supported on Windows, macOS and Linux. However, the installation process is not straightforward as it requires self-signing an IPA file using Cydia Impactor or AltStore, installing it on your iOS device, allowing profile permissions, and then launching the app to complete the process. Once the initial process is complete, you can then use your favorite package manager, like Cydia, to download and install tweaks to modify and enhance your iOS device interface and features.

If the claims are true, that would mean Apple’s latest flagship devices like the iPhone 11, iPhone SE, and 2020 iPad Pro can be jailbroken, even if they’re running iOS 13.5, which was released only yesterday.

Whilst unc0ver notes on its website that jailbreaking is technically legal and that any jailbreak software can be uninstalled, it does come with some fairly hefty risks including voiding your iPhone’s warranty, data loss, and more.

Apple will use Sony's newest "state of the art" image sensors for its iPhone 15 lineup next year, according to a report from Nikkei Asia (via MacRumors). Sony's new sensors are able to pack more photodiodes thanks to a semiconductor architecture that puts photodiodes and transistors in separate layers. As such, these sensors double the saturation signal...
Nehal Malik
26 mins ago