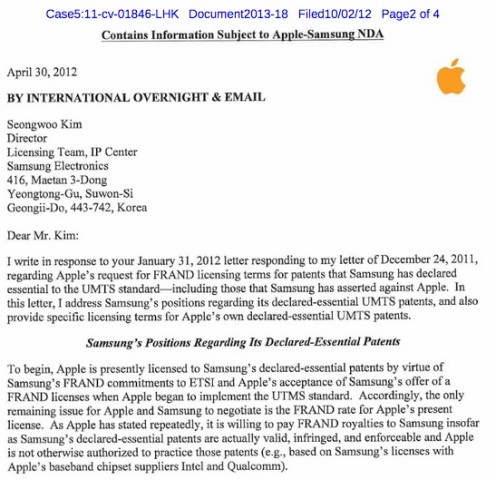 The final part of the letter is highlighted by FOSS Patents as Apple proposes terms to Samsung, countering the 2.4% royalty rate requested by the latter:

“Apple is willing to license its declared-essential UMTS patents to Samsung on license terms that rely on the price of baseband chips as the FRAND royalty base, and a rate that reflects Apple’s share of the total declared UMTS-essential patents (and all patents required for standards for which UMTS is backward-compatible, such as GSM)–provided that Samsung reciprocally agrees to this same, common royalty base, and same methodological approach to royalty rate, in licensing its declared-essential patents to Apple.

Apple estimates that this approach, which implements the true meaning of and requirements imposed by FRAND, results in a $.33 (thirty-three cents) per unit royalty for the Apple patents. Apple will today license its declared-essential UMTS patents to Samsung at that rate, provided Samsung reciprocally agrees to the FRAND principles that result in that rate. This rate would be applied to all Samsung units that Apple has not otherwise licensed. Samsung would likewise need to agree that it would only charge royalties on Apple units that Samsung has not otherwise licensed.”

What does this all mean? FOSS Patents concludes the following:

What Samsung wants is for Apple to say no so it can use this as an excuse to pursue injunctive relief — and so far no court outside of Korea has accepted this excuse. Even in Germany, Samsung has reached a point at which the courts may now defer to the European Commission’s Directorate-General for Competition on these FRAND licensing issues.

Samsung recently added the iPhone 5 to the existing list of Apple devices they believe to be infringing on 8 of its patents, including those related to LTE. Within the letter, Apple touts its LTE patents acquired from Nortel last July, which they spent more than $2 billion for. Samsung has also requested a new trial, arguing the lead jury foreman had a conflict of interest and biased due to a former lawsuit involving Seagate.

You can check out the full letter posted here, which contains some strong assertions from Apple to Samsung and makes for an entertaining read if you’re interested in this ongoing court case.