Researchers from the University of Calgary have come up with an innovative system to solve one-handed smartphone operations. When we only have one hand free to use our iPhone, it can be quite tricky when two handed operation is required. Therefore, the new input system titled ‘Fat Thumb’ was born. The system uses touch gestures and pressure to enable users to zoom in with just one thumb.

To mitigate this problem, we contribute Fat Thumb: a method for one-handed input on a mobile device that caters to the thumb’s limited operational range. It uses the thumb’s contact size, where changing the thumb’s pitch fluidly allows for transitioning between different modes of interaction (Figure 1b,c).

The thumb’s movement then performs the selected mode. We illustrate and evaluate this technique in a pan-andzoom task in comparison to exiting single-handed techniques (i.e., a slider, Tilt-to-Zoom [12], and CycloStar [22]). Our findings demonstrate that the Fat Thumb technique compared well to existing one-handed pan-and-zoom techniques, with participants overwhelmingly preferring it. 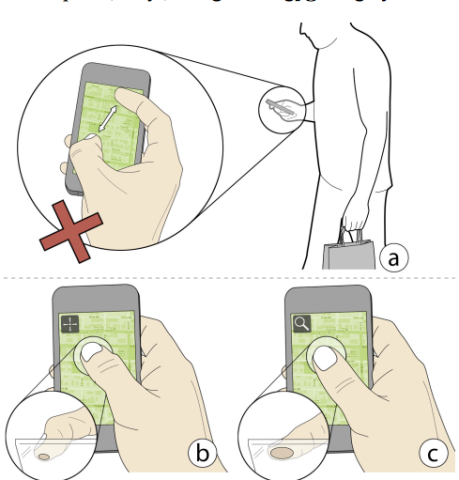 In comparing Fat Thumb to other one-handed techniques, their tests with participants concluded Fat Thumb resulted in less strokes and time to perform one-handed tasks. Check out the video below to check out Fat Thumb in action:

The problem with massive smartphones is that it can be troublesome to tap all corners of the screen when your display is 5 inches or larger. Many have argued the iPhone’s 3.5 inch display allows complete manipulation of the phone with just one hand.