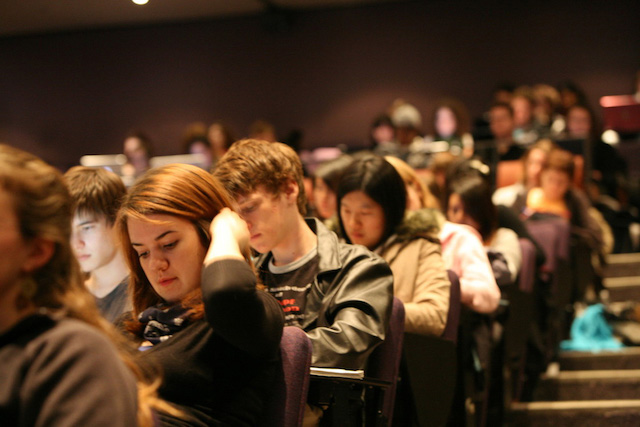 A new exams app introduced by the University of Toronto not only saves paper, but also helps speed up exam attendance, improve student tracking, as well as enhance the overall staff and student experience.

Called ‘Exam Invigilation’, the app was successfully tested with more than 500 students at the Faculty of Arts & Science, and was developed by U of T’s Enterprise Applications and Solutions Integration (EASI). The app relies on a Bluetooth scanner that links to the tablets and connects to Student Life’s TCard photo database.

“In the past, staff used the small photo on the TCard to confirm a student’s identity, and they relied on a paper-based registration process,” says Vik Chadalawada, senior manager of student information systems with EASI. “Now, they can quickly scan the student’s TCard, confirm their identity on a tablet that displays large photos, and accurately track student information.”

“Our goal is to let students focus on writing their exams, which is the culmination of a lot of hard work,” says Christine Babikian, associate director, scheduling and examinations at the Faculty of Arts & Science.

The application saved staff over half the registration time compared with the previous process during its recent pilot. In the past, staff would walk around the examination room and ask students to sign a registration sheet. Now, they can avoid interrupting students by silently scanning their TCards. If students however forget their TCard for their exam, staff can manually register them by checking a piece of official identification against the TCard photo database.

The application also lets staff track student information in real time, showing how many students have checked in for the exam and who is late or absent. The Faculty of Arts & Science is now planning to use the app in large examination locations in December.

[caption id="attachment_389637" align="aligncenter" width="1024"] Image: OpenAI[/caption] ChatGPT creator OpenAI today announced the launch of a new "classifier" designed to detect machine-written text. "We’ve trained a classifier to distinguish between text written by a human and text written by AIs from a variety of providers," the company said. While the company's AI-powered chatbot has taken the...
Nehal Malik
37 mins ago