Opera has today become the first ever internet browser developing company to offer an integrated free, unlimited VPN service for desktop computers. Mac OS X, Windows and Linux users will no longer need to download VPN extensions or pay for VPN subscriptions in order to access blocked websites, while also protecting their own privacy while accessing the internet on public Wi-Fi. “We’re introducing another major feature in just a matter of a few weeks; a native, unlimited and free VPN client, right inside your browser!”. 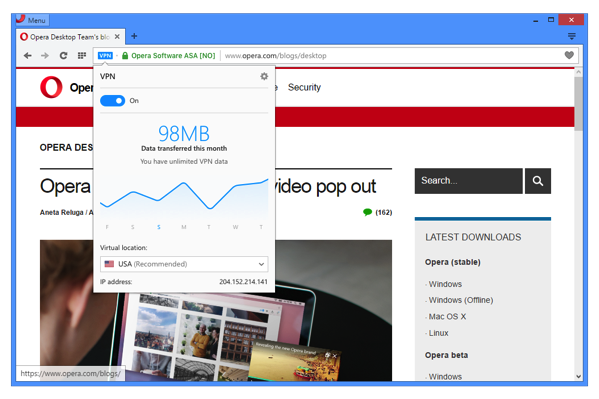 Opera’s built-in free VPN is very easy to use. To activate the feature, Mac users just need to click the Opera menu, select “Preferences” and toggle the feature VPN on, while Windows and Linux users need to go to the “Privacy and Security” section in “Settings” and enable VPN there. A button will appear in the browser address field, from which the user can see and change location (more locations will appear later), check whether their IP is exposed and review statistics for their data used.

It’s free and unlimited to use, yet it offers several must-have options available in paid VPNs, such as:

Here’s a quick video from Opera showing how it works:

Netflix has announced today they are rolling out the ability to great game handles, which are public usernames that can be used across the company’s slate of mobile games on iOS and Android. Supported games will have leaderboards such as Rival Pirates, Dominoes Café and Lucky Luna. How to create your Netflix game handle? It’s […]
Gary Ng
22 mins ago

Apple today started rolling out iOS 16.1 beta 3 for developers, with a public release of the build expected soon. YouTuber zollotech rounded up all of beta 3's changes in a recent video. iOS 16.1 beta 3 comes with a modem update that could resolve connectivity issues for users that were facing any, and other notable...
Nehal Malik
26 mins ago