Update 1: Looks like shipping has been changed to 1-2 weeks, whereas last night it showed ‘ships by October 14th’:

After some restless waiting, Apple pre-orders for the iPhone 4S have gone live in Canada (and around the world), and the much anticipated unlocked prices have been revealed. 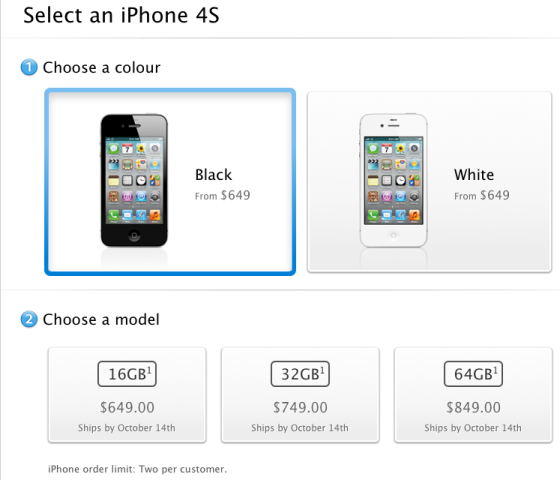 Models are available in black or white, and the item description reads “Ships by October 14th”. As always, a limit of two orders per customer.

Typically, Apple under promises on these dates, but given the demand the iPhone 4S will have, don’t be surprised if there is a slight delay. I placed my order for a 32GB iPhone 4S in black, from the convenience of my home (yes, with pants on). Taxes will be added to your order once you receive your confirmation receipt.

Our U.S. neighbours will have unlocked iPhone 4S models available in November. A slight victory for Canada, if that stuff matters to you (hey, we wait way too often for things to arrive here).

Apple also has unlocked 8GB iPhone 3GS and iPhone 4 models for sale on Apple.ca, priced at $375 and $549 respectively. That unlocked iPhone 3GS is probably the best deal I’ve ever seen for an unlocked smartphone.

What did you order tonight? I’m going to bed now. Zzz….