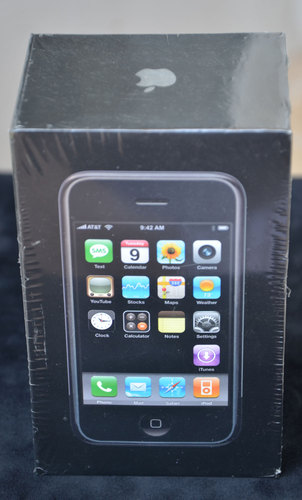 The first generation iPhone, announced on January 9th, 2007, brings back so many memories. Through the years, I always bring myself back to the recorded original keynote to watch Steve Jobs unveil the first generation iPhone. If you really think about it, the iPhone changed the smartphone industry. Just following the Apple vs Samsung trial has proven what smartphones looked like during pre-iPhone days.

So if you would like a part of history, the iPhone, you can grab it for $10,000 on eBay. Originally released on June 29th of 2007, Apple went on to sell nearly 1.5 million iPhones within the first two quarters. Canadians had to go buy theirs in the USA and smuggle them back home and jailbreak/unlock in order to get them working.

The unique part about this original iPhone is the sealed box. Unlike many others selling their original handsets, this iPhone has never been opened. The seller, samsonbible, is calling it a collector’s item:

“Stunning rare collectors choice Apple iPhone 1st generation 8GB and factory sealed!! You are seeing a piece of history!! This is an incredible collectors show piece!! This would be a crown jewel for any collection!!… …The collectors dream Apple iPhone!!”

Diving further into eBay, the original iPhone must be thought of as a collector’s item by many. Phsledge is selling an original iPhone for $10,000 on eBay too. His, similar to samsonbible’s, is sealed once again.