Apple could be trying to clear stocks to make way for the next iPhone coming this summer. The iPhones will include the newest baseband so they cannot be unlocked. With the Google Nexus One (it’s now available for Canadians!) sold unlocked for similar pricing, consumers in the USA have some choices to make. This is most likely an attempt to clear out existing stock.

Gizmodo obtained an image that reads:

“Effective immediately, customers purchasing iPhone as device only at full price are no longer required to have an AT&T account or provide a form of ID. Device only full price iPhone sales are limited to one per person per day.” 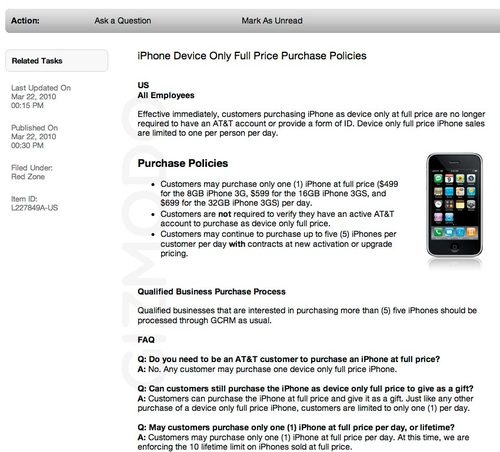 In Canada we have been able to buy iPhones outright, but they are locked to local carriers. What is interesting to note is that our iPhone 3G readers are already being offered early upgrades for the iPhone 3GS by Rogers.

Anyways, if you’re an iPhone 2G user, this could be the perfect time to upgrade as prices are expected to drop for the iPhone 3GS once the new iPhone is released this summer.