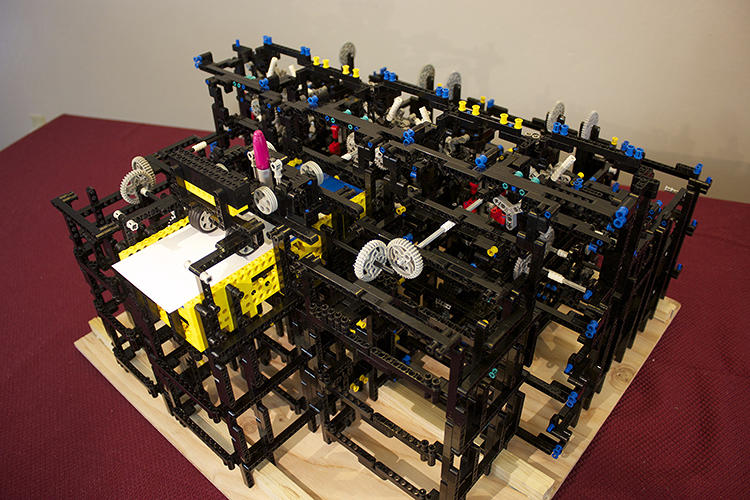 Inspired by the Martin Scorsese film Hugo, Apple Engineer Andrew Carol built a programmable machine that can writes messages and draws pictures, which was all built using Lego. The Lego enthusiast says he got his latest idea after watching Hugo which was filled with mysterious automation.

“Walking out of the theater, my mind was spinning with ideas.”

He proved the design was workable by creating a prototype mechanism using Lego chains to move a pen over a piece of paper in two dimensions. In November 2013, Carol had an itch to finish the product and spent every weekend and holiday week off working on it. He had the final product working by U.S. Thanksgiving at the end of November.

“Part of the attraction is the puzzle solving aspect, but I would disagree that these are Rube Goldberg machines,” Carol says. “Rube Goldberg machines were intentionally designed to be overly complicated ways to solve simple problems. My machines are as simple as possible within the constraint of being purely mechanical and using Lego parts. In a certain sense, I’m trying to make machines as they might have rationally been approached in 1880 if Lego was more available than custom metal parts.”

Here is a video of Carol’s Lego drawing machine in action:

Carol says his next project is going to be a Lego machine that can play a perfect game of tic-tac-toe.