Distracted driving is a huge problem nowadays, with the Insurance Bureau of Canada saying it’s now the leading cause of traffic deaths, topping impaired driving.

But it looks like some people aren’t getting the message, such as one Vancouver man, who was caught by police with a tablet and iPhone attached to his steering wheel—with strings.

Yesterday, the @VPDTraffic account tweeted “Can’t make it up. Guy had iPad and cell phone attached by strings on steering wheel while driving! Yes, that’s his ticket he’s holding.” 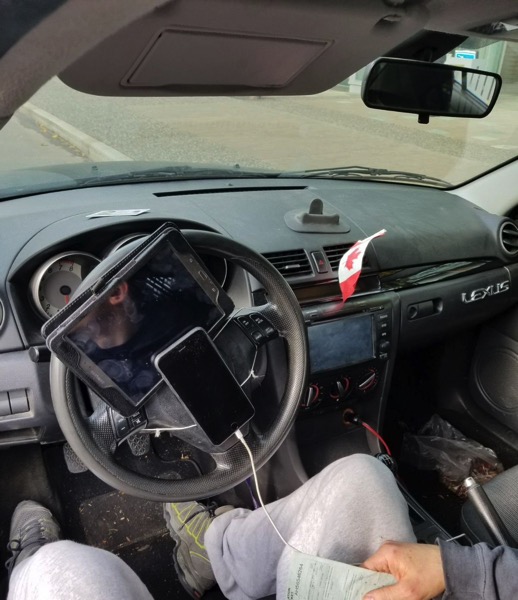 Yes, that’s not an iPad but some sort of Android tablet. The Plus-sized iPhone he has in the car is attached to the front of his steering wheel with an elaborate string setup. Talk about ingenuity.

According to CBC News, Const. Jason Doucette said, “Based on the information collected during their conversation, our officer decided that educating the driver about the devices would be the most effective approach,” handing him an $81 ticket instead for failing to show his driver’s license. Vancouver Police did not issue a distracted driving ticket, after “a lengthy conversation about road safety.”

Other recent distracted driving stories in Metro Vancouver recently include a driver last week playing Pokemon Go on his iPad last week, while last month, a 51-year old woman was similarly caught playing the game while driving in New Westminster.

Samsung and LG are gearing up to start mass production of displays for Apple's first OLED iPads, according to a report from the South Korean publication ETNews (via MacRumors). The information comes from Ross Young of Display Supply Chain Consultants, a well-known industry analyst. According to Young, both South Korean display manufacturers will produce "hybrid" panels for...
Nehal Malik
60 mins ago