Real-time GPS tracking is a wonderful thing, especially when your car’s been stolen (or for stalking your kids), like a recent case in Vancouver with Katya Pinkowski’s Tesla Model S 85D.

According to The Province, Pinkowski’s Tesla was stolen from an underground parking last Thursday night near Granville Street in downtown Vancouver. When she returned to the missing vehicle, she thought it had been towed but turned out stolen, after her husband managed to use the Tesla smartphone app to track down the location of the car. 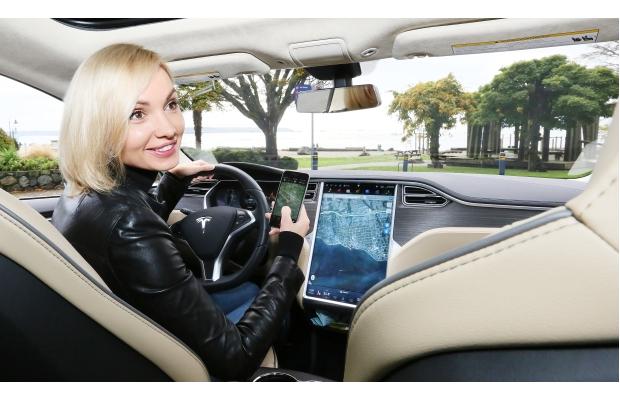 Katy Pinkowski inside her Tesla; image via Kim Stallknecht, PNG

Tracking information revealed the thief was driving in Richmond, a suburb south of Vancouver at 70 kilometres per hour. Unfortunately for the driver, Pinkowski was already on the phone with 911 dispatchers tracking the car in real-time, with Richmond RCMP setting up shop to stop the vehicle in its tracks, which happened near No. 5 Road and River Road.

How did the vehicle get stolen? Turns out an extra Tesla key fob was mistakenly left in the car by the owners, so when the would-be thief approached the vehicle and touched the door handles, they popped up and the doors unlocked–an automatic keyless entry feature of the car (the 85 model starts at nearly $100,000 CAD):

The thief, it turns out, had gained access to the car using an extra electronic key fob the couple had bought earlier in the week and mistakenly left inside the vehicle.

As he approached the futuristic car and touched its self-presenting door handles, it must have beckoned him inside, Katya Pinkowski said.

Pinkowski considered calling Tesla to kill the car’s engine remotely or even using the smartphone app to open the sunroof, but instead let the RCMP detain the vehicle, which ended up with some rim scrapes and leftovers from the thief’s dinner.

Richmond RCMP spokesman Cpl. Dennis Hwang told The Province “This is the first such Tesla recovery our detachment has encountered,” while adding “What was unique in this incident was the ability for the Tesla owner to provide the E-Comm police dispatcher with accurate real-time tracking data,” and “High tech definitely played a helping role.”

Howard Geddes Skelding, 24, was arrested and charged with possession of stolen property over $5,000.