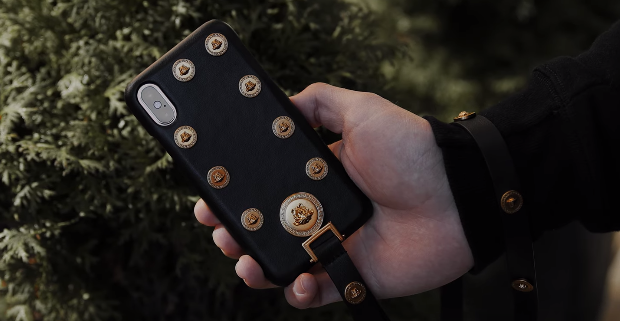 How does an expensive iPhone case like this from Versace fair? Victoria-based YouTuber Justin Tse got his hands on one and shared a review on his channel. Tse has been reviewing some luxury smartphone accessories lately and his latest is this leather case from Versace that is made in Italy.

Tse confirms this Versace Tribute Leather iPhone case does indeed fit the iPhone XS, despite marketed for the iPhone X.

The case is made of 60% calf leather and 40% plastic plus the case itself is “embellished by Tribute Gold tone Medusa medallions” along with a “Tribute Medusa medallion enriched leather strap.”

Tse said the medallions are plastic and the unboxing experience was underwhelming, with just a dust bag holding the case. The camera cutout is larger than normal and the leather strap is longer than normal, says Tse. The case’s thickness also does not support wireless charging. Overall, the case is more cosmetic more than anything, with its larger than necessary exposed upper area, lacking protection for the top of your device.

In a nutshell, an iPhone case which costs more than your iPhone. We are…doomed?