After targeting the free calling app Tango, the Syrian Electronic Army has allegedly hacked the Viber support page, according to EHackingNews, as seen below (the page now shows a 404 forbidden error): 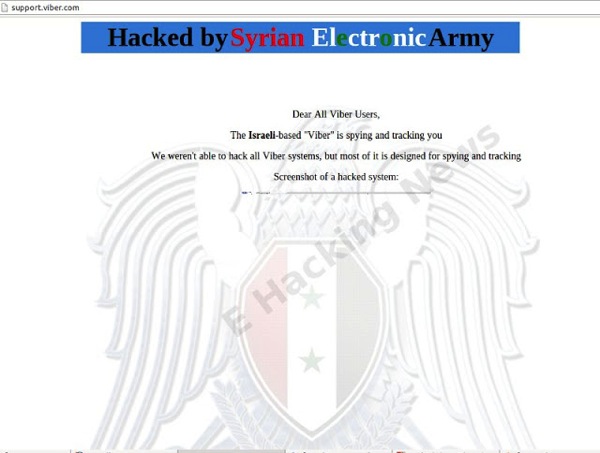 A recent tweet by the Syrian Electronic Army advises Viber users to delete the app and also posted a list of Viber admin names, emails and phone numbers, while also claiming to have downloaded backups from the site as well. Speaking to EHackingNews, the S.E.A. claims they still have access to Viber’s systems and have deleted a page used by the company to manage accounts.

We have reached out to Viber for comment on the matter and will update this post accordingly.

Update: Viber has told TechCrunch how the attack happened; they say your data is safe:

Today the Viber Support site was defaced after a Viber employee unfortunately fell victim to an email phishing attack. The phishing attack allowed access to two minor systems: a customer support panel and a support administration system. Information from one of these systems was posted on the defaced page.

It is very important to emphasize that no sensitive user data was exposed and that Viber’s databases were not “hacked”. Sensitive, private user information is kept in a secure system that cannot be accessed through this type of attack and is not part of our support system.

We take this incident very seriously and we are working right now to return the support site to full service for our users. Additionally, we want to assure all of our users that we are reviewing all of our policies to make sure that no such incident is repeated in the future.

Update 2: Viber has responded to us with pretty much what they told TechCrunch, plus the following:

Viber, like many other companies such as Microsoft, Cisco, Google, and Intel maintains a development center in Israel. It seems like this caused some people to come up with some pretty bizarre conspiracy theories. It goes without saying, that these claims are completely without merit, and have no basis in reality whatsoever.