Today iSuppli Teardown Analysis Services completed what’s called a ‘virtual teardown.’ The company bases the teardown solely from specifications released by Apple and combines it with information on the internals already known. Everything stated on below is just an estimate. 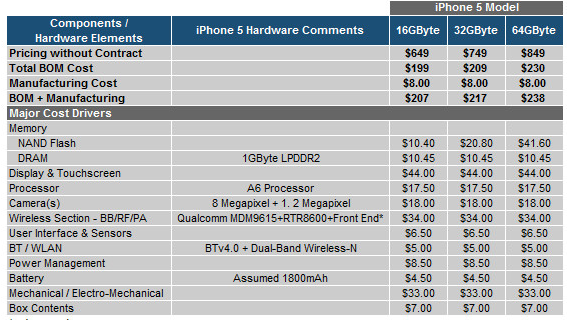 The full chart above provides the costs of all components individually found inside the iPhone 5. Through all three models, the only changes made are to the NAND Flash category.

“With the base model carrying a $199.00 BOM, the iPhone 5’s components are expected to be slightly more expensive compared to the iPhone 4S model,” said Andrew Rassweiler, senior principal analyst, teardown services, for IHS. “The low-end iPhone 4S with the same memory density as the base-model iPhone 5 carried a BOM of $188.00, according to a preliminary estimate issued by IHS in October 2011. While the price of some components, such as NAND flash, has fallen during the past year, the iPhone 5’s overall BOM has increased mainly because its display and wireless subsystems are more expensive compared to the iPhone 4S.”

iSuppli notes that the larger touchscreen display, LTE chip, and A6 chip are the culprits behind the heftier pricing. NAND Flash on the other hand dropped significantly in price.

Do you think Apple is charging us users too much for the iPhone? All smartphones carry similar pricing, so Apple is just continuing the trend in my mind.