Wacom has today announced the launch of its new ‘Bamboo Sketch’ smart stylus for iOS devices, that lets you draw on your iPhone or iPad just like you would with a pen and paper. “Visual thinkers who use an iPad or iPhone for their notes and sketches require a pen that offers precision and individualization,” said Mike Gay, Senior Vice President of the Wacom Consumer Business Unit.

The company claims that its new “smart stylus” changes with the user. You can personalize the Bamboo Sketch by choosing a soft or firm nib, and by customizing the buttons so favorite commands are at your fingertips. “Bamboo Sketch offers an advanced writing and drawing experience for those whose first instinct is to reach for a pen and paper as soon as inspiration strikes”. 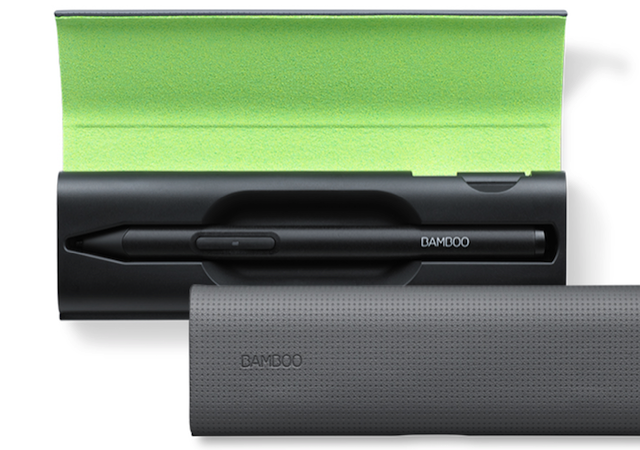 Consumers can write and draw with Bamboo Sketch in a way that looks and feels like a pen on paper, thanks to its 2,048 levels of pressure sensitivity. It’s also easy to store and transport the new smart stylus in a neat travel case that carries the pen, replacement nibs, and a USB charging unit.

Users also don’t need to worry about recharging the battery, since after being connected to the iPad or iPhone via Bluetooth, battery life lasts up to 15 hours. As with the other members of the Bamboo stylus family, Wacom designed the Bamboo Sketch in an ergonomic triangular shape for a unique in-hand feel and comfort.

The Bamboo Sketch is fully integrated with leading apps for sketching and drawing, including Bamboo Paper, ArtRage, Autodesk SketchBook, Concepts and MediaBang Paint. When Bamboo Sketch is paired with these apps, visual thinkers can sketch ideas with precision similar to pen and paper. Wacom’s Inkspace cloud service lets users store, shape and share their work.

Wacom’s Bamboo Sketch will be available online and in select retailers starting in June for US $79.95.

The display technology experts over at DisplayMate have crowned the iPhone 14 Pro Max's screen the best to ever grace a smartphone, giving it their highest-ever A+ rating and "Best Smartphone Display Award." DisplayMate is one of the world's leading authorities on display technology. The corporation's reviews and reports are based on comprehensive, objective laboratory tests...
Nehal Malik
6 mins ago