A Sweden based security firm Micro Systemation, that helps law enforcement agencies around the world crack digital security systems, has posted a video (via Forbes) demonstrating how easy it is to bypass the passcode on an iPhone, iPod touch or iPad device. The video shows an application which the firm calls XRY that can quickly crack an iOS passcode, dump its data to a PC, decrypt it, and display information like the user’s GPS location, files, call logs, contacts, messages and even a log of its keystrokes. 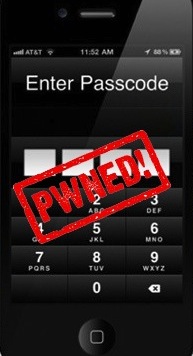 Mike Dickinson, the firm’s marketing director and the voice in the videos, said:

”When people aren’t wearing uniforms, looking at mobile phones to identify people is quite helpful.”

[…] The company sells products capable of accessing passcode-protected iOS and Android devices in over 60 countries. It supplies 98% of the U.K.’s police departments, for instance, as well as many American police departments and the FBI. Its largest single customer is the U.S. military.

The report also says the firm uses the same kind of exploits that jailbreakers use to gain access to the phone. Check out the passcode extraction demo video below: