Waze has today announced a new feature that lets users save a planned drive to their Waze app directly from the Waze.com Live Map on their desktop computers. The new feature simplifies the process of planning a drive by finding the best route and time to leave, before even getting into the car. 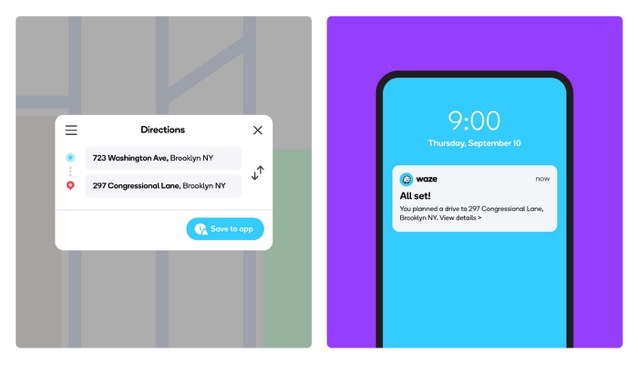 Once a drive has been planned and save to the Waze iOS or Android app, users will then receive time-to-leave reminder notifications based on real-time traffic, and the ability to quickly start navigation.

To start using this functionality, users simply need to visit waze.com/livemap and input their route and desired arrival time. They then simply need to tap ‘Save to app’ and the planned drive will appear on their Waze app.

“We know a huge number of Waze users visit the Waze.com Live Map each month to check live traffic and road conditions,” said Yael Schwartzberg, Product Manager at Waze. “With many people stuck in front of their computers at home as a result of the COVID-19 outbreak, we’re now giving them a way to make the most of this setup and hit the road as easily as possible once it’s time to leave.”

Last week, Waze announced its partnership with DC Comics, which lets Waze users select the iconic voice of Batman (Kevin Conroy) or The Riddler (Wally Wingert) for getting directions until October 31, 2020.