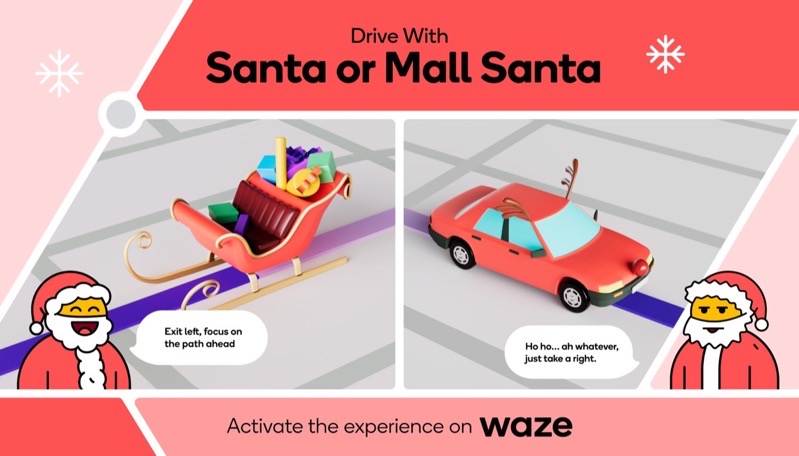 Google-owned Waze has released its annual survey of users using first and third-party data, asking respondents in Canada, along with those in the U.S., U.K., France, Italy, Israel, Brazil and Mexico about their driving experience using the app and behaviours.

Santa is Here for Driving with Spotify Playlists

Also new is a Santa driving experience available today, allowing Canadians to pick from two different versions on their drives, including regular Santa and Mall Santa.

There are also two Spotify playlists for your drives with Santa as well, in partnership with Universal Music:

“Waze’s inaugural Year in Rear View gives us the chance to capture a snapshot of Canadian driving behaviours and help us better understand driving trends during 2021, a year when many of us got back to travelling on the road,” said Mike Wilson, Canada Country Manager, Waze, in an issued statement to iPhone in Canada.

Here are the results of the 2021 Year in Rear View from Waze:

What did Canadians do while driving in 2021? It depends on where you live:

Top cities where Wazers drove the most this summer (June-September)?

Are you planning to travel for the holidays this year?

“We learned that Canadians showed a preference for beautiful scenery, while most drivers got on the road to visit family and go shopping over the last year. We’re looking forward to seeing how Canadians take to the roads in 2022 – a year we predict will see even more drivers on the road,” added Wilson.

Waze said the research was conducted by OnePoll, taking place from October 27 to November 9, 2021, with a sample size of 11,000 adults in the countries mentioned above.