According to the latest numbers from analyst firm Canalys, the global wearable band market grew 5.6% year on year with 40.9 million units shipping in Q2 2021. More importantly, Xiaomi overtook Apple to become the top-shipping wearable band vendor in the world. 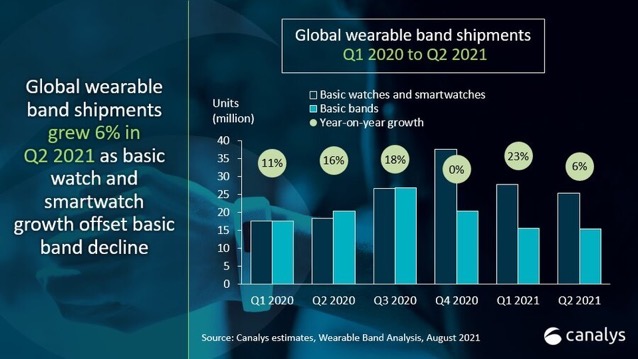 “Xiaomi made a wise move to hasten the release of the Mi Band 6, which is a more compelling device than its predecessor,” said Canalys Research Analyst Cynthia Chen. She added that Xiaomi’s quick pivot to basic watches also helped the company boost its wristwatch shipments by 1.3 million units this quarter.

Apple, however, continues to lead the global wristwatch market, commanding a significant lead with a 31.1% market share in Q2 2021.

“Vendors are attempting to make a big generational leap in smartwatch technologies. To stand out, they are improving the fundamentals, such as user experience and battery life, creating their own distinct UIs and leveraging their respective ecosystems to draw out new and unique use cases,” said Canalys Research Manager Jason Low.

The report also highlights that wristwatch shipments are continuing to overtake those of basic bands, with wristwatches accounting for 62% of global wearable band shipments. Canalys expects wristwatches to be the key growth driver for the wearable band category for years to come.