An Apple patent filing published by the U.S. Patent and Trademark Office (USPTO) hints that the company is developing an inductive Apple Watch charger that is either embedded in a strap accessory, or attaches itself onto an existing band, Apple Insider is reporting. Titled “Charging apparatus for wearable electronic device”, the filing details a wearable charger for the Apple Watch with inductive power transfer technology. 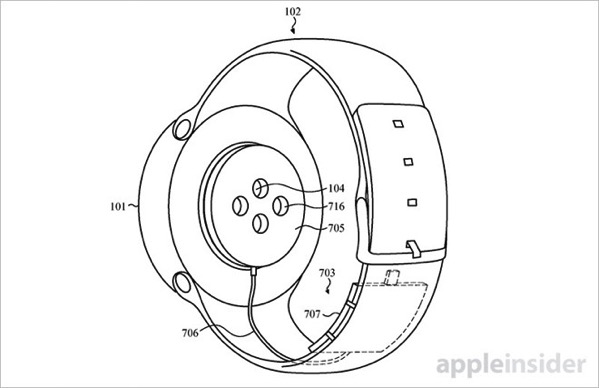 The filing reveals a portable charging module with two-way design, featuring an inductive power transfer component, or inductive coil, good for transmitting power to Watch or accepting power to top off its internal batteries.

Apple proposes fitting the battery module under a Watch band or beneath the device chassis. This arrangement helps protect sensitive internal components and more aesthetically pleasing than clipping the apparatus to an outer band surface.

To accommodate Apple Watch’s existing biometric sensor suite, which exists as a bank of optical sensors on the device’s underside, the battery design calls for apertures or translucent windows to be formed in the inductive head unit to allow for the passage of light.

The unit also incorporates sensors, or in some embodiments electrical contacts, capable of detecting a user’s body. This means the device can limit charge rates when Watch is being worn and boost rates when it is not.