Developed by Daniel Wu, a settlement platform and virtual services co-ordinator at Immigrant Services Calgary, a new smartphone app called ‘Welcome to Alberta’ aims to help immigrants to Canada in learning a new language, finding a place to live, and applying for jobs as they get settled in their new home (via The Star). 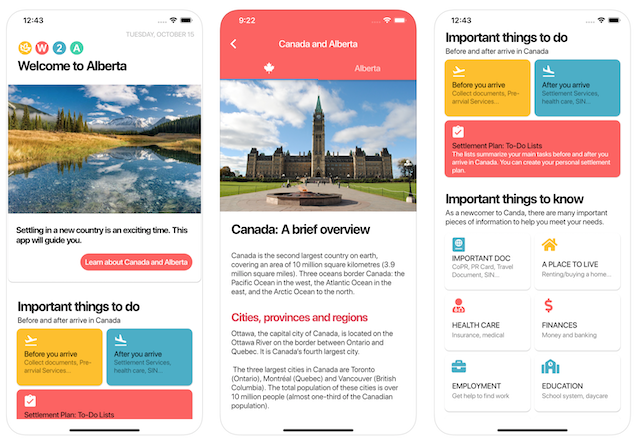 Wu, who was a newcomer himself just seven years ago, has been helping other immigrants get settled in Alberta. “We find a lot of newcomers want to find information online,” he said. “But there’s not a lot of valuable information resources.”

Wu explained that Welcome to Alberta is more than just a mobile version of the organization’s website. He noted that the app includes a set of checklists and milestones to guide newcomers through the process of immigration and settlement. “We really want to make it like a companion,” said Wu:

It also has information on living costs in various cities, the weather conditions to expect across Alberta, how to access tax benefits and how to maintain permanent residency.

The app is currently in English, but Wu said soon more languages will be added. They are also working on adding chat functions and partnering with other agencies to provide more resources as time goes on.

You can grab the app for iOS using the following App Store link.

On Saturday evening there was a Twitter Spaces hosted by Mario Nawfal along with Kim Dotcom, which Elon Musk joined in from using Starlink on his private jet as it took off. The topic was to cover the Twitter Files shared by the social network recently, but Musk also talked about various issues, including advertising […]
Gary Ng
45 mins ago