With Apple’s ‘Let’s Talk iPhone’ set to take place next Tuesday, it should also mark the official release of iOS 5 GM, along with iCloud. According to a recent email received by an AppleInsider reader, the welcome email to iCloud has apparently been sent out prematurely.

“Once iCloud is set up, it stores your content and wirelessly pushes it to all your devices,” the email says. “For example, buy a song with iTunes on your computer, and it will appear on your iPod touch and iPad.”

It continues: “When you snap a photo on your iPhone it will automatically be sent to your iPad. You can start creating a Pages document on your iPhone, and put the finishing touches on it from your iPad. There’s no need to dock or sync to your computer. With iCloud, it just works.” 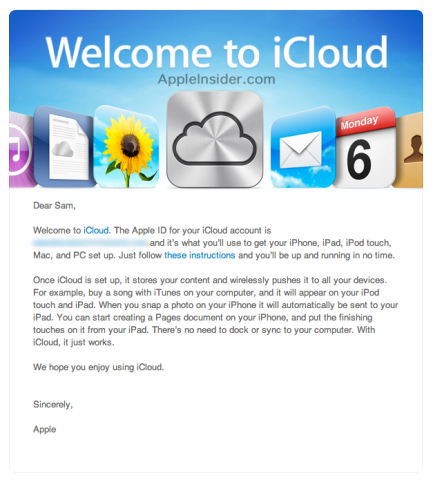 Users are instructed to the following URL: http://www.apple.com/icloud/setup, which at this point is time has not gone live yet. iCloud so far, works amazingly well to share photos via your iPhone and iPad, and is one of the most anticipated features coming from iOS 5.