What the heck is “ECID SHSH”?

Hey, RoryPiper here. This week, I thought I would take a minute to try and explain what the “ECID SHSH” is, and why it may be very important for future jailbreaking. Currently it only affects the iPhone 3GS, and the newest, 3rd gen iPod Touch, and will most likely affect every new version of the iPhone, and iPod Touch from here on.

So what exactly is it? Well “ECID” stands for Exclusive Chip ID.Â This is a unique chip identification that is different for every iPhone 3GS and iPod Touch 3g. When you restore your device, iTunes contacts the Apple servers, to generate signatures, just for your device. It is widely thought that this a new security feature, implemented to stop jailbreaking of future firmwares.

If you remember, just a few months ago, there were all kinds of blog posts going around the internet telling you to “…get your IBEC and IBSS now, before the next firmware, or you’ll never be able to jailbreak again!!”, or something like that. It sent all iPhone 3GS owners into panic mode, as we all quickly restored, and followed the tricky steps to grab the files we needed.

Saurik, a member of the iPhone Dev Team, and creator of Cydia, has built a server that will store your ECID SHSH, if you select this option in Cydia. The plan is to have Pwnage Tool contact Saurik’s server, while creating your new 3GS custom firmware, and imbed the ECID. Then, in theory, when you restore with your custom firmware, and iTunes contacts the Apple server, Apple will see a proper ECID, and generate the signatures.

If you updated Cydia, last week, just before the newest Pwnage Tool was released, you were given the option to store your ECID SHSH on Saurik’s server. If you did, your iPhone 3GS should look like this when you open Cydia: 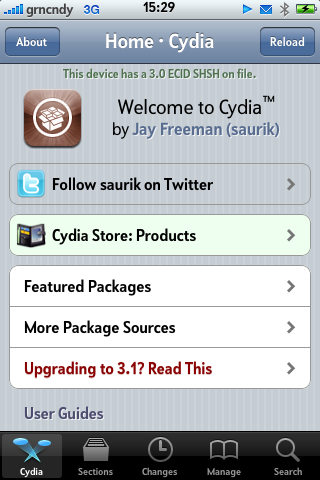 You’ll notice a message on the top saying “This Device has a 3.0 ECID SHSH on file”. If you did the update, but selected “NO”, there’s a trick to go through the process. On the main page of Cydia, at the bottom, there is a paragraph of text. Tap the word “developing” and you’ll be able to get your ECID SHSH saved.

If you tap on the “Upgrading to 3.1?” link, on an iPhone 3GS, you’ll get this important message: 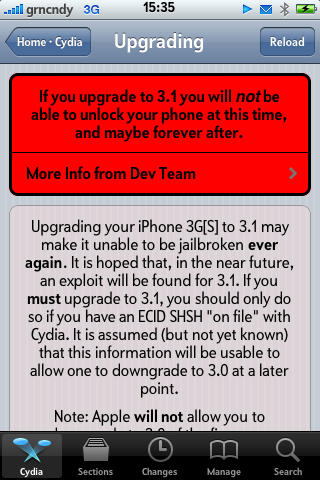 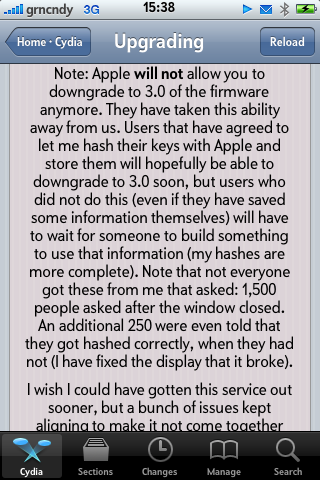 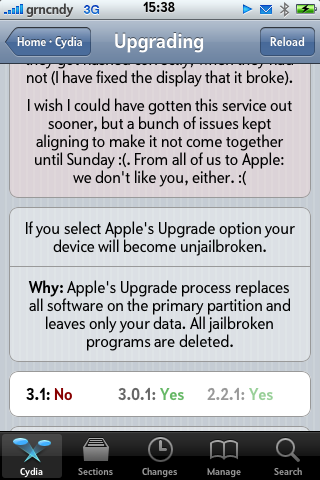 So, I hope that clears up some confusion. Again, this only affects iPhone 3GS and iPod Touch 3rd gen owners. At this point, there is no jailbreak for these devices on 3.1, and it is most likely due to this ECID issue.Â Bottom line: do not update your iPhone 3GS to an official firmware, or you may never be able to jailbreak again.

If you have any questions, feel free to post a comment below. I’ll do my best to answer them. You can also visit my blog “Green Candy“, for other iPhone related items, and you can follow me on Twitter: @rorypiper.