Here’s What to Expect from the Camera in iPhone 6 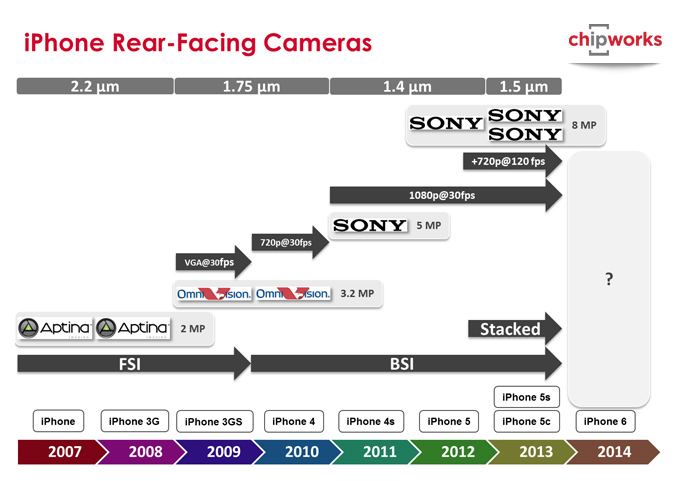 With Apple’s eighth generation iPhone just around the corner, it’s worth speculating on its coolest hardware feature, the camera system. The folks over at Chipworks have compiled the iPhone camera’s timeline, starting from its initial release in 2007 till the iPhone 5s/5c and then what to expect from the iPhone 6, which is set to hit the market next month.

The original iPhone was launched with cameras locally sourced from Aptina. OmniVision captured the 3GS primary camera socket while its back-illuminated technology was introduced in iPhone 4. The iPhone 4S camera packed Sony’s Exmor-R back-illuminated chips while the Exmor-RS stacked chip image sensors were used in iPhone 5s. Video functionality was added for iPhone 3GS and has evolved to HD 1080p@30fps for the last few generations.

Now the question is, what’s coming in iPhone 6? Well, the source predicts we’ll see another 8 MP stacked CIS primary camera, instead of 13 MP, 16 MP or 20 MP as previously rumoured. Apple has been clear that it values low-light sensitivity over the megapixel race. Also, Apple has already tweaked its iOS 8 Camera app to support time-lapse videos and manual exposure control.

“I also believe it’s too early to see 4K UHD video added to iPhone. Samsung’s Galaxy S5 and others are there now, but Apple has shown it prefers to slightly lag its competitors and perfect a feature before rolling it out.  I expect 4K video will come to iPhone in 2015.

As for iPhone’s front-facing cameras it’s been all OmniVision going back to iPhone 4. Typically used in lower than optimal light conditions, these chips have tended to feature larger pixels.  Apple transitioned to back-illuminated secondary chips for iPhone 5 with also corresponded to 720p video. iPhone’s front-facing chip resolution now sits at 1.2 MP. Sony appears likely to have made a play for the iPhone 6 secondary camera chip socket.  We’ve been seeing a lot of 2 MP back-illuminated Sony chips in other manufacturers’ front-facing cameras so it’s not unreasonable to guess Sony will capture both sockets.” 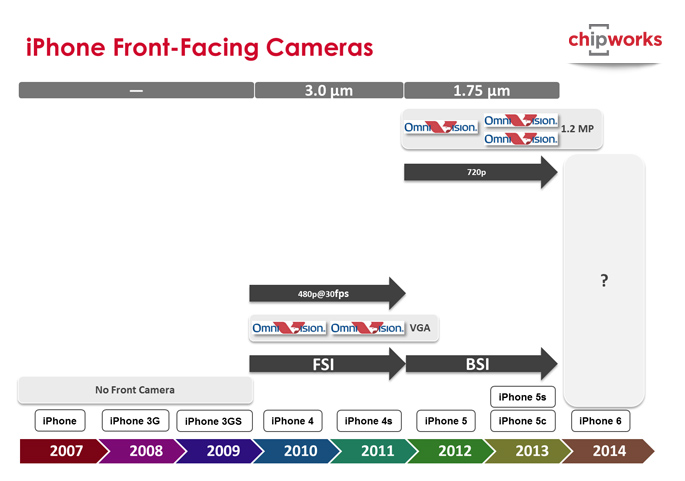 Of course, we don’t have to speculate much longer as Apple has already confirmed the September 9 special event, where we might see the iPhone 6 unveiled in two sizes.