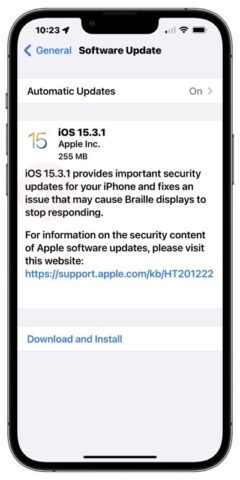 Apple said the update “provides important security updates for your iPhone and fixes an issue that may cause Braille displays to stop responding,” but there’s a (slightly) more to it than that.

In a recent YouTube video, Zollotech breaks down all of the new features and changes in iOS 15.3.1.

iOS 15.3.1 does not include a modem firmware update, but it does finally fix a bug that has been plaguing iPhones and iPads since Apple started rolling out iOS 15 and causes Storage information in Settings to take a long time to load and often display incorrect storage figures.

Apple did not say whether the notorious pink screen bug that some iPhone 13 users have been experiencing was resolved.

As for security updates, iOS 15.3.1 patches an actively exploited and dangerous zero-day flaw within WebKit. You should update your iPhone and iPad as soon as possible.

The YouTuber reported no noticeable issues on the new firmware build, and not much should change from iOS 15.3 in terms of performance and battery life.

iOS 15.3.1 is available on all iPhones going as far back as the iPhone 6S.