While WhatsApp already offers end-to-end encryption across its messaging and voice calling features, any iCloud backups of these chats are, however, are not encrypted. According to a new report by WABetaInfo, the company is still in the process of bringing password-protected backups to iCloud. 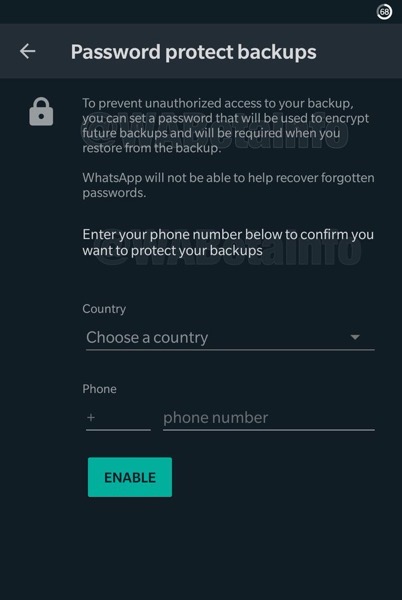 Looking at the screenshots shared by the source, it seems that WhatsApp users will soon be able to set a password that will be used to encrypt future backups.

It will be available in a future build for iOS and Android.”

“This password will be required when you restore from the backup,” the description reads.

As previously announced, @WhatsApp is working on cloud backups encryption.

The chat database and media will be safe from unauthorized access when using a password. The password is private and it’s not sent to WhatsApp.
It will be available in a future build for iOS and Android. pic.twitter.com/Lp06PaECBX

It is not yet known as to when the feature will officially begin rolling out.

Apple has just rolled out a redesign for its official website, introducing an all-new navigation bar with fancy drop-down menus on both desktop and mobile. As spotted by Parker Ortolani, the updated drop-down bar makes it easier to navigate the website and relatively faster to get to individual product pages. All-new https://t.co/pXaoM71lcY nav bar with...
Usman Qureshi
30 mins ago

According to leaker @Jioriku, Apple will soon launch the Beats Fit Pro wireless earphones in Volt Yellow, Coral Pink, and Tidal Blue colours. Although Apple is yet to make an official announcement, MacRumors claims to have spotted listings for the new colours on some Apple reseller websites in Europe. Similar to the AirPods Pro, the...
Usman Qureshi
48 mins ago

Google's parent company, Alphabet, on Monday started notifying employees in Canada of job cuts, according to a spokesperson for Google (via The Globe and Mail). The news comes a little over two weeks after Alphabet CEO Sundar Pichai announced the company would be laying off 12,000 employees (or 6% of its total workforce) across its...
Nehal Malik
1 hour ago