Apple sells wheels for the 2019 Mac Pro for the slightly ridiculous price of $699 USD. On Thursday, a third-party accessory maker launched a cheaper option: the OWC Rover Pro wheel kit for $199. 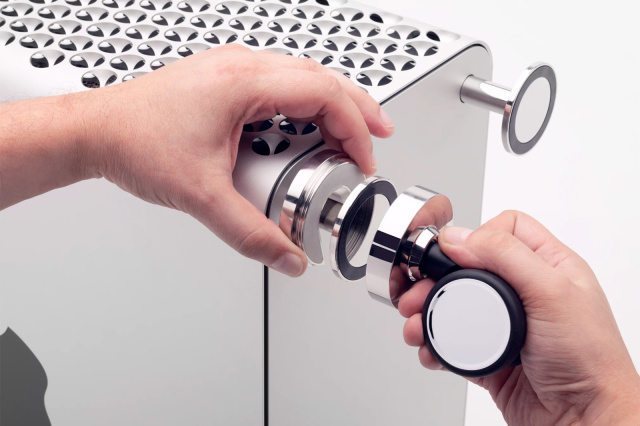 The product stands out with several advantages. First, the OWC alternative is much cheaper than Apple-branded wheels. Mac accessory company OWC now sells four stainless steel swivel wheels with soft rubber tread that does not leave any marks on the surface for $199 USD. It is a reduced price for the pre-order period, while the regular set price is $249 USD. But it’s still much cheaper than that of Apple, which sells the kit for $700 USD if purchased separately and for $399 if ordered with the Mac Pro.

Despite the lower cost, the new, third-party solution might be better. Apple’s kit requires tools to remove the “feet” from the Mac Pro before attaching the wheels. OWC’s wheels, in contrast, quickly attach to the current feet.

“No tools, no hassle, no worry: simply place your Mac Pro’s factory feet into the Rover Pro’s polished stainless-steel housings and secure with a few hand twists,” notes OWC. “When you’re done moving your Mac Pro around, the Rover Pro allows quick and easy conversion back to the factory feet for stationary use.” There are also wheel stops that prevent any unintended movement.

The kit uses highly polished stainless-steel to match the look of the Mac Pro. The wheels themselves are non-marking soft rubber. And they offer 360-degree articulating rotation and low friction bearings.

The Rover Pro wheels should arrive in September. They’re still not a trivial purchase, but they’re considerably easier to justify if you’re still cost-conscious (yes, even for a $5,999+ USD tower) and want a way to quickly shuttle your Mac Pro around a movie set or music studio.