When Will iPhones Get Personal Hotspot and iOS 4.2.5? 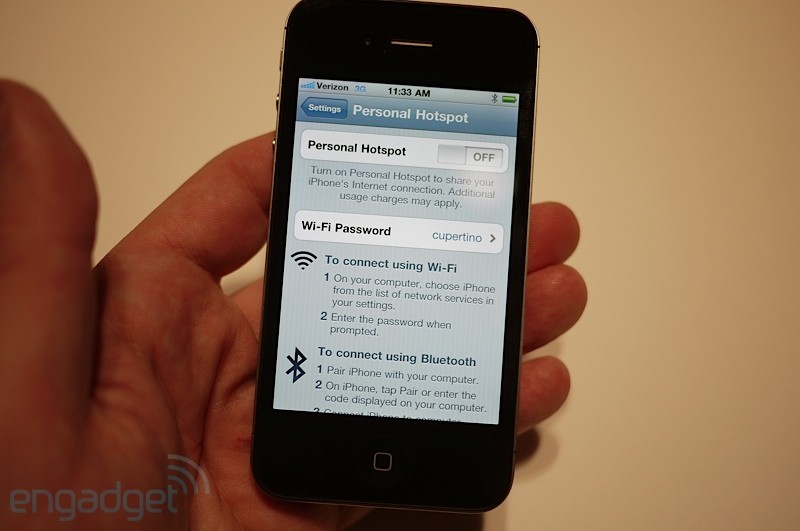 The much anticipated Verizon iPhone 4 announcement in the US brought three surprises for all of us:

In Canada, we’ve had USB/Bluetooth tethering since it was available in iOS. The big feature we are all craving now is Personal Hotspot, which will essentially turn your iPhone into a MiFi device. Existing jailbroken iPhone users have had this feature through the brilliant app, MyWi.

Will Apple release Personal Hotspot in its next release of iOS 4.2.5? Apple has never released a version of iOS with version x.3, so my prediction is to expect Personal Hotspot when iOS 5 is previewed in the Spring, possibly during the rumoured announcement of iPad 2.

It’s not a matter of if Personal Hotspot is coming, it’s a matter of when. You can probably imagine the rage of existing iPhone users not having access to this great feature. iPhones should all be unified via iOS, and right now Verizon iPhone 4 users have the upper hand in both software and hardware. But maybe Apple will hold off just long enough to entice enough AT&T users to jump ship to Verizon, and sell a tonne of new iPhones. As for the rest of us we’ll have to keep waiting, or jailbreak to use MyWi in the meantime.

Google has joined forces with consumer advocacy group OpenMedia to oppose the Liberal government's controversial Online Streaming Act, also known as Bill C-11. The Liberals tabled Bill C-11 in February as an amendment to the Broadcasting Act. It is designed to give the Canadian Radio-television Telecommunications Commission (CRTC) regulatory authority over online streaming platforms, the...
Nehal Malik
12 mins ago

Apple Music has just rolled out the ability for artists and bands to personalize their profile page with a custom bio, as well as the option to add their hometown, birth date or year formed, and more (via MacRumors). Following the latest updates, artists can now also quickly add lyrics for their songs on Apple...
Usman Qureshi
21 mins ago