Although Apple released it quietly, the Smart Battery Case is making waves in the blogopshere due to its weird design choice. Some reviewers, such as Joanna Stern of the WSJ and Adam Clark Estes of Gizmodo, love it; while others, such as Lauren Goode of The Verge, don’t. After using it for several days, Daring Fireball’s John Gruber concluded that the design choice may be funny or weird but still works. Here is why.

First, this is the battery case Apple wanted to make, at least according to his “little birdie” source (maybe Phil Schiller?)–splashing cold water on the theory its design was to avoid Mophie’s case patents (as per Nilay Patel of The Verge):

A well-placed little birdie who is perched in a position to know told me that Nilay Patel’s speculation that the unusual design was the byproduct of Apple trying to steer clear of patents held by Mophie (or any other company for that matter) are “absolute nonsense”. This birdie was unequivocal on the matter. Whether you like it, hate it, or are ambivalent about it, this is the battery case Apple wanted to make. 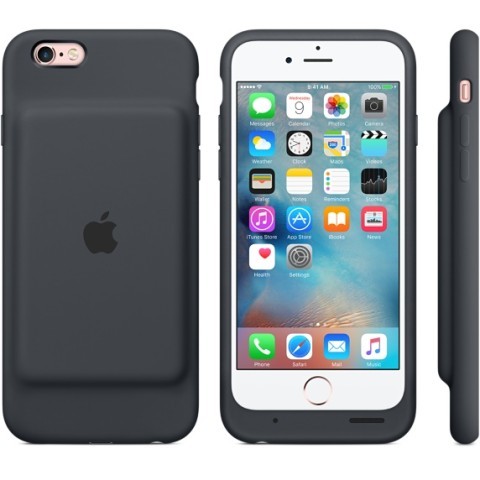 Secondly, the Smart Battery Case is an “inelegant design, but it is solving a problem for which no one has created an elegant solution,” Gruber says. Apple just chose to make severe compromises to solve a major issue for power users: The iPhone 6/6s battery simply doesn’t last a whole day.

I think the main reasons for this design are practical. The battery doesn’t extend to the top in order to accommodate the hinge design for inserting and removing the phone. Why it doesn’t extend to the bottom is a little less obvious. I suspect one reason is that that’s where the “passively coupling antenna” is.1 Extending the battery to cover it would defeat the purpose. Also, there’s a hand feel aspect to it — normally I rest the bottom of my iPhone on my pinky finger. With this case, I can rest the bottom ridge of the hump on my pinky, and it’s kind of nice. I also like putting my index finger atop the hump.

As he points out, making the iPhone 6s a bit thicker than it is would have eliminated the need for an external battery (see the battery life of the bigger iPhone 6/6s), but since Apple decided to slim down the device, they had to come up with something that solved the complaints of power users.

The Apple solution looks weird, but the material choices and software integration (besides it being all Lightning) make it a viable alternative that costs $129 in Canada. There are cheaper alternatives, but Gruber says if he had to choose between the available battery cases, he’d choose Apple’s. (By the way, his go-to solution is a portable external battery from Mophie.)

If I were going to go back to using a battery case, there’s no question in my mind that I’d go with Apple’s. The only downside to it compared to Mophie’s (and the others — but I think Mophie is clearly the leader of the pack) is that it looks funny from the back. But to my eyes it doesn’t look that funny, and though third-party cases don’t look weird, they don’t look (or feel) good. In every other way, Apple’s Smart Battery Pack wins: it’s all Lightning, so any Lightning peripherals you have will work, and there’s no need to pack a grody micro USB cable; it supplies more than enough additional power to get you through an active day; its unibody design makes it much easier to insert and remove the phone; and it feels much better in hand