A new survey carried out by DevMate by polling around 700 Mac developers on their feelings about working on OS X, has revealed that majority of them dislike the Mac App Store, which is whey they choose to distribute their apps outside of it, TheNextWeb is reporting. Almost half of the developers polled seem to take a dual-distribution approach, which suggests they’re hedging against relying on the Mac App Store for discovery. 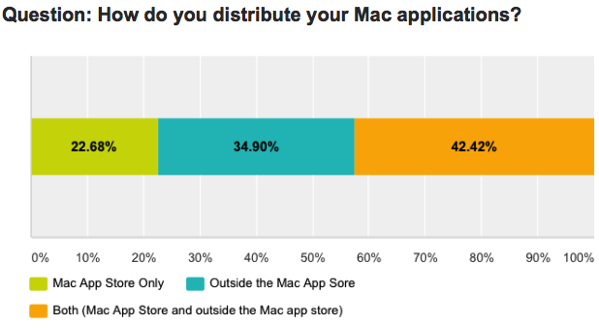 If you’re curious why developers seem to hate the Mac App Store, it comes down to revenue and features. Roughly two-thirds of devs think Apple’s 30 percent cut is too steep, while the inability to respond to reviewers directly or offer trial periods for apps is also a problem.

Apple’s changes for the iOS App Store are handy, but this survey shows us just how forgotten the desktop really is. While we look toward a name change for OS X and possible new MacBook Pros on the horizon, Apple really needs to make developing for the platform exciting again.

Will Apple bring something good for the Mac developers at this year’s WWDC?

According to a report from The Verge's Umar Shakir, a firmware update Apple started rolling out for AirPods Max in May significantly reduces the strength of the premium headphones' Active Noise Cancellation (ANC), according to his observations. Apple's most expensive AirPods have pretty strong ANC. It is (or at least was) strong enough that some people...
Nehal Malik
5 mins ago