Why the iPhone Won’t Get Thunderbolt Anytime Soon

Apple refreshed their MacBook Pro line up yesterday, with the highlight being Intel’s super fast connection, Thunderbolt. Formerly known as Light Peak, this Intel technology allows for both electrical or optical connections.

A question many have been asking lately: Will the iPhone get Thunderbolt in the future? The answer is no. Macworld breaks it down:

…Thunderbolt relies on PCI Express, the architecture that underpins Macs and most PCs. But iOS devices donâ€™t use a PCI Express architecture, which would presumably make it difficult to simply stick a Thunderbolt port on an iPhone. Plus the dock-connector port on iOS devices provides quite a bit of additional functionalityâ€”itâ€™s got 30 connection pins for a reason, after all. Finally, itâ€™s not clear what benefits Thunderbolt would provide that the dock-connector port is missing. We suspect itâ€™s far more likely that Apple will eventually sell an optional Thunderbolt-to-dock-connector cable for charging and syncing. 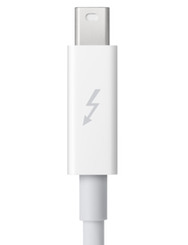 So there you have it. Thunderbolt isn’t coming anytime soon. I wish I had a ‘Thunderbolt’ connection to improve my sync times within iTunes though–don’t you?

Are you buying a new MacBook Pro?