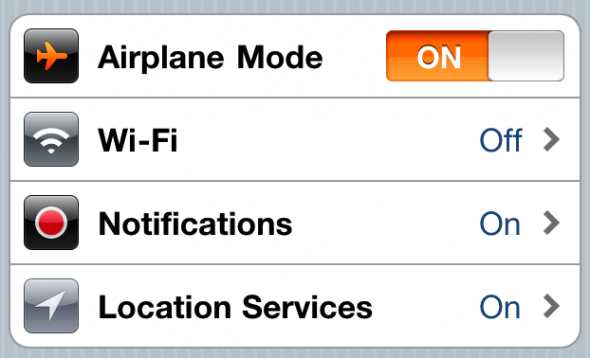 For all you air travellers, how many times have you had to listen to flight attendants ask you to turn off your electronic devices during take off and landing? Many passengers have questioned this policy, but recent research has resulted in evidence that anything with a battery has the possibility of interfering with onboard instruments, according to the Radio Technical Commission for Aeronautics (RTCA), a non-profit that develops aviation recommendations for the Federal Aviation Administration (FAA):

“Any device with a battery – including cellphones, e-readers, laptops, PDAs (personal digital assistants) and Game Boys – has some level of emission that has the potential to interfere with cockpit instruments or navigational equipment,” says Boeing engineer Dave Carson.

Even an iPhone in Airplane mode isn’t immune to emitting frequencies that can possibly interfere with instrument panels. Apple describes Airplane mode as the following:

Airplane mode disables the wireless features of your iPhone, iPad, or iPod touch to comply with airline regulations.

But here is one story of a Canadair compass working improperly due to a passenger’s iPhone in Airplane mode, instead of being turned off:

A pilot of a Canadair CRJ-200 regional jet reported compass system malfunctions after takeoff at an altitude of about 9,000 feet on a flight last May. The pilot says a passenger had an iPhone in standby mode; when the phone was turned off, the compass system operated properly

As this is only one incident, it might be easy to dismiss it. But is it that unreasonable to ask passengers to turn off their electronics during take off and landing? We sometimes forget we’re strapped to chairs 38,000 feet in the sky and traveling at over 600 KM/h. Should we really take the risk of bringing the plane down, only to play Bejeweled?

I’m sure most of can live without using our devices for a few minutes, unless you’re a Words with Friends addict like Alec Baldwin. Do you turn off your devices during take off and landing, or have ever dismissed instructions to do so?