Will Rogers Allow Skype Over Data Network like AT&T?

Happy Thanksgiving to every single one of our readers out there–hope you enjoy your day and take some time to think about what you’re thankful for (aside from the iPhone).

How many of you out there are avid Skype users? You were probably excited to hear about Skype launching for the iPhone–except for Canada. Well, eventually Canadians got their Skype app for the iPhone but there’s still one thing that is stopping us from using the app to its entirety: calls over the Rogers/Fido data network.

Skype iPhone App Does Not Allow Calls Over the Data Network

The Skype iPhone app does not allow calls over the data network in Canada. You can make calls when there is a WiFi connection. However, there are ways to bypass this restriction if you have a jailbroken iPhone. All you have to do is install VoIPOver3G (free for the iPhone 3G via Cydia), or purchase 3G Unrestrictor (works great on the iPhone 3GS).

Even though these iPhone “hacks” are out there, the widespread Canadian population isn’t into jailbreaking their iPhones. They just want apps that work the way they were designed to work. So when news broke that AT&T in the USA was going to allow Skype for the iPhone to make calls using the data network, this got many people up north in Canada excited!

Rogers To Allow Skype Calls Over the Data Network–Unlikely!

As for Rogers adopting this policy like AT&T in the USA, the chances of it happening are very slim (they do like to introduce new “government” fees though). Why? Well the answer is obvious. Rogers will lose out on long distance calls billed at $0.35/minute. When I use my Skype app on the iPhone, I can make unlimited calls to Canada and the USA for–$3/month! If everyone was to use Skype, Rogers would lose out on their profitable long distance revenue. 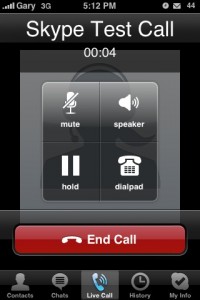 Once AT&T finalizes the whole Skype over the data network, the US version of Skype will allow calls over 3G. Will Canucks be shut out once again? Maybe not! Canadians can get access to this download by creating a US iTunes account to download the app. Skype on your iPhone coupled with the $3/month unlimited USA/Canada calling plan, plus Caller ID makes for one wicked setup.

Until Rogers allows Skype calls over the data network, Canadians will once again have to conjure up a multitude of ways to bypass restrictions. This seems to be a Canadian thing-to-do when it comes to gaining access to what our American counterparts have but we don’t.

So what’s your verdict: will Rogers allow Skype over 3G in Canada?