Tomorrow is going to an exciting day for iPad and iOS users. Apple will uncover the details on the much anticipated iPad 2, and rumours of MobileMe becoming an online storage for media purchased from iTunes.

Cult of Mac has details from an “Apple staffer”:

The Apple staffer, who asked to remain anonymous for obvious reasons, said the new MobileMe service will store music, TV shows, and films that were purchased from the iTunes store. The staffer also said that there was talk inside Apple of being able to upload all your music and videos to the cloud whether it was purchased from iTunes or not. However, they couldnâ€™t confirm whether this will be rolled out or not.

Will We See a Preview of iOS 5 Tomorrow?

Last year, Apple sent out invites for a media event to showcase the future of what was formerly known as iPhone OS. This preview event happened on April 8th, 2010. We are already into early March.

Would Apple hold another event in the next month just to preview iOS 5? I don’t believe so. Either they will lump in the preview of iOS 5 tomorrow with the iPad 2 announcement, or wait until the summer iPhone event (rumours of a cheaper iPhone coming). So, I predict tomorrow we might see a glimpse of iOS 5, and after the event iOS 4.3 will be available (Golden Master seeded to devs, or a full release) immediately after.

Either way, tomorrow will be exciting to see what goodies Apple has in store.

What do you think? iOS 5 preview tomorrow or in the summer? 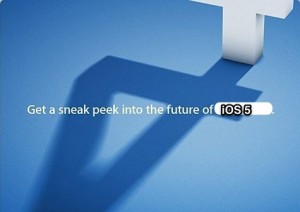