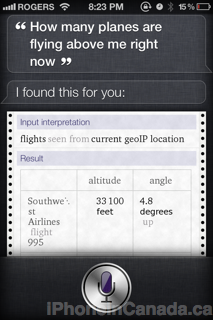 Apple’s implementation of Wolfram Alpha, the sophisticated search engine that can answer and compute questions you pose to it, has paid dividends for its creator, Stephen Wolfram. According to the New York Times, interactions from Siri on the iPhone 4S now make up 25 percent of all queries:

Siri accounts for about a quarter of the queries fielded by Wolfram Alpha, whose staff has grown to 200. Several large companies in health care, financial services and oil and gas recently hired Dr. Wolfram’s private company, Wolfram Research, to do tailored corporate versions of Wolfram Alpha for them. Microsoft also licenses Wolfram Alpha technology.

Wolfram Alpha is able to compute the answers on basically any topic, and can even find out what planes are flying above you at any given moment. The Wolfram Alpha search engine is set to have a new ‘pro’ version to be released this Wednesday, a premium version of its current form to handle data and images.

How often does Wolfram Alpha return results for you via Siri?