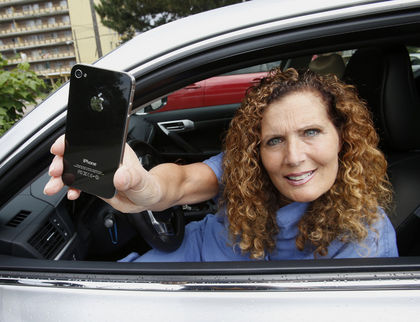 Scarborough dentist Sheryl Lipton accidentally forgot her iPhone in her car when going for a run and paid the price when thieves smashed her window and stole the phone. She called Toronto Police, spoke with a constable from the 33 Division for help but to no avail as they were “dismissive” of her situation.

But then remembered she had Find my iPhone enabled and managed to track down her stolen phone to the Shops at Don Mills, as she told the Toronto Sun:

“I went online and located my cellphone at the Shops at Don Mills,” she said. “I called police and told them the situation but they said that there was nothing that they could do. I explained the urgency of the situation, the location of the phone and I could meet them at the mall in 10 minutes.”

Lipton said there was no enthusiasm.

She knew she was all alone.

“I told them that I was going to confront the perpetrators myself and would like police backup,” she said. “I was told that they would not do anything and I had to follow their procedure.”

So alongside her daughter, the 57-year old went solo to recover her iPhone at the mall. She explains the situation below:

“As we approached the mall, the WiFi indicated the person or persons had left the mall and were now across the street,” she said. “The Find My iPhone app showed me exactly where the phone was, and there were three men in their 20s or 30s, some over six-feet tall, lurking in the lane way of an apartment building, shaking hands and one getting into a vehicle.”

Lipton sprinted across the street, approached the three men and demanded her phone back–only to have them swear at her and call her crazy. She demanded the phone back or she would call 911, and one of the group admitted the device was in their possession. One of the group told Lipton they had purchased the device for $80 earlier in the morning, which she responded it was stolen property and wanted it back.

Once she showed them she knew the passcode to unlock the phone, the men knew it was hers and gave the phone back. Lipton was upset the police did not prioritize her situation when she clearly knew the location of where her stolen iPhone was. Toronto Police Const. Victor Kwong says they are investigating what happened and says the 33 Division was “not aware of this”:

“It is very well possible she waited seven hours for such a call,” Kwong said. “Theft of property with no suspect on scene or suspect information is assigned a low priority which gets bumped by higher priority calls.”

Lipton says she was aware of the possible consequences but took the risk to recover her phone and hoped the police would have been there. Similar cases involving Find my iPhone and stolen phones had police support in Calgary and Victoria to successfully recover devices. Regardless, Lipton did it all by herself–now that’s one dentist with a pretty good bite.