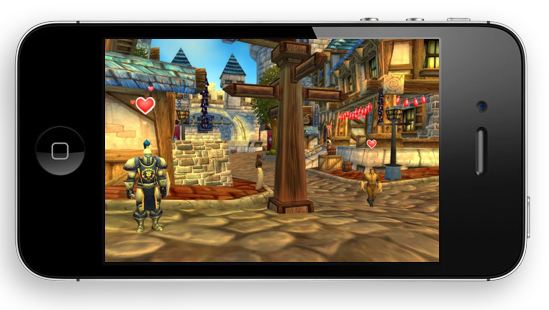 Lagrave explained to Eurogamer that they are definitely looking into to bringing WOW to mobile gaming, but it is hard. They want to get it just right, and it’s difficult to get everything from the desktop version packed into a little hand held device. He further explained that they won’t put out a watered down version, saying “We won’t do it until it’s decent.”. Lagrave says they are always looking into it, but haven’t solved it yet.

There have also been rumours that Blizzard could release a companion app to it’s next expansion “Mists of Pandaria”, which will include a pet battle system and some “mini games” like farming and fishing. The app could give you access to your mini games, when away from your computer. Lagrave couldn’t confirm that any such app is in production, but he did agree that this is something they could look at.

“So we certainly look at that, but we just haven’t solved it. What we’ve done with WOW on mobile devices is very simplistic: view the armoury, you check your auctions – not just on mobile but also on web. When we have an epiphany, everyone will know,” he added. “But for now, no epiphany!”

So, is World of Warcraft coming to iOS? Not anytime soon, but it’s something we could see in the future. Would you want to play WOW on your iPhone or iPad? Personally, I don’t play the game at all, but I can see how addictive it can become. Maybe that’s why I have avoided it. 😛

Facebook has today announced some new ways to customize what you see in your Feed, including an option to select 'Show more' or 'Show less' on a post to see more of what you want and less of what you don’t. Along with updates from your friends, Groups, and Pages, Facebook recommends posts from creators...
Usman Qureshi
6 mins ago