Some 5 billion unique subscribers are now connected to a mobile service worldwide, representing two-thirds of the global population, according to real time data from GSMA Intelligence. 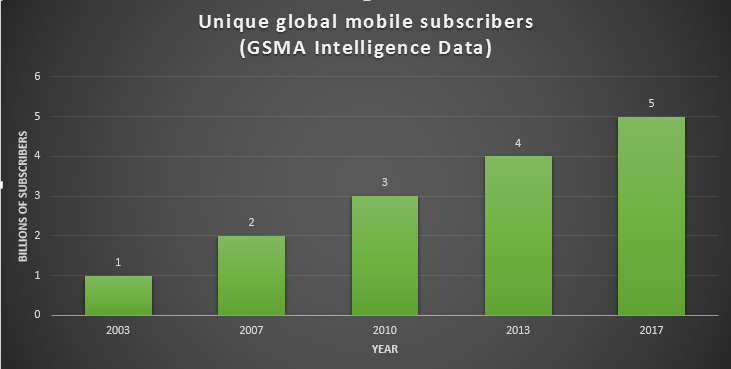 “Reaching the 5 billion subscriber milestone is a tremendous achievement for an industry that is only a few decades old, and reflects the many billions of dollars that mobile operators have invested in networks, services and spectrum over many years,” commented Mats Granryd, Director General of the GSMA.

“Today mobile is a truly global platform, delivering connectivity and, perhaps more importantly, social and economic opportunities to citizens in all corners of the world,” he continued. “This massive reach allows the mobile industry to be a key player in delivering global initiatives such as the UN’s Sustainable Development Goals.”

GSMA indicated more than half (55 percent) of global subscribers are in the Asia Pacific region, while Europe, Latin America, and Sub-Saharan Africa each account for around 9 percent of unique subscribers. North America is farther down the list with around 6 percent of the global subscriber base.

Overall, unique global mobile subscribers will increase to 5.7 billion by the end of the decade, representing almost 75 percent of the world population, according to the GSMA Intelligence forecast.