WWDC 2011 Sold Out Before Some People Even Read About It

Apple announced the dates for WWDC 2011 this morning, and it looks like the event is sold out. By the time some people have read about WWDC 2011 (and the lack of iPhone 5 announcement, which I mentioned I’m okay with)–it has already been sold out.

Yes, in less than 10 hours, all the tickets are gone. Last year, it took 8 days for tickets to sell out. Given that iOS development has grown incredibly in a year, I’m still surprised the event sold out in less than a day, let alone 10 hours. @PenLlawen does the math: 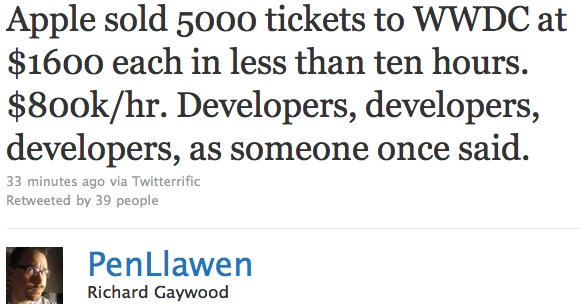 So Apple will generate almost $8 million dollars in ticket sales from WWDC 2011, according to that 5000 attendee number mentioned by Steve Jobs. Incredible.