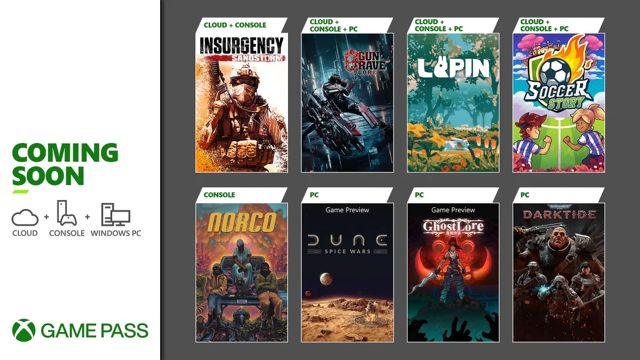 For those who aren’t familiar, Xbox Game Pass grants access to a rotating catalog of over 100 games, including first-party titles. Subscribers also get to enjoy new games on day one from Xbox Game Studios, indie blockbusters, and many more.

Xbox chief Phil Spencer recently spoke about the profitability of the company’s ongoing gaming subscription service, revealing that the service makes up 15% of Microsoft’s total revenue.

Jump into the world of illuminated manuscripts and play as Andreas Maler, a journeyman artist living in 16th century Bavaria. Get caught up in the murder and scandals happening in the town of Tassing.

In the wake of catastrophe, you must find the means to make your family whole again. Somerville is a Sci-Fi adventure grounded in the intimate repercussions of a large-scale conflict.

Set in Frank Herbert’s groundbreaking Dune universe, you must lead your faction and battle for control and dominance over the harsh desert planet of Arrakis. ‘The Air & Sand Update is also coming November 17, adding new layers of strategy with military flying units and new buildings.

Ghostlore is an ‘Eastpunk’ Action-RPG where you fight monsters from Southeast-Asian folklore. Ghostlore offers a detailed item and character customization system, procedurally generated maps, and an authentically retro 90’s aesthetic.

Five rabbits used to live under a park, but construction forced them to leave their beloved hole. Players need to help Liebe and her friends explore the world with precise control. Meet new friends, remember past events, and hop on to the end of the adventure!

Your brother Blake has gone missing in the aftermath of your mother’s death. In the hopes of finding him, you must follow a fugitive security android through the refineries, strip malls, and drainage ditches of suburban New Orleans.

Utilize your unlimited ammo Cerberus pistols and your transformable EVO-coffin to unleash devastating combos in pursuit of maximum damage and style.

Battle in the war-torn environments of a contemporary conflict through a series of intense co-op and PvP multiplayer modes. Feel every bullet and fear every impact in fierce close-quarters combat as your team fights toward victory.

Soccer Story is a physics-driven adventure RPG, where every problem can be solved with your trusty magic ball. Along the way, you’ll need to best bad guys in 1v1s, compete in a range of sports, and solve puzzles with your brain and your balls.

Take back the city of Tertium from hordes of bloodthirsty foes in this intense and brutal action shooter. Warhammer 40,000: Darktide is the new co-op focused experience from the award-winning team behind the Vermintide series.