Microsoft has just revealed a handful of new games coming to Xbox Game Pass in July, with some titles available on day one, while others, including some returning fan favorites, are coming soon as well. 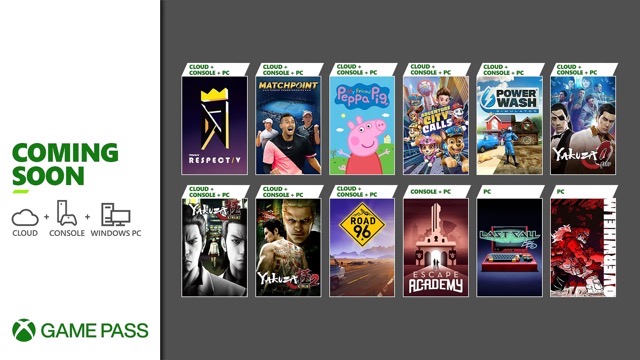 Xbox Game Pass grants access to a rotating catalog of over 100 games, including first-party titles like Halo Infinite, Forza Horizon 5, and Psychonauts 2.

Here are all the new additions coming soon to Xbox Game Pass:

Boot up your Z5 Powerlance and dial into Last Call BBS, the last game from Zachtronics! The Barkeep’s loaded up his retro computer with a full set of puzzle games for you to download and play.

The glitz, glamour, and unbridled decadence of the 80s are back in Yakuza 0. Play as Kazuma Kiryu, a low-ranking yakuza, who gets caught in a world of trouble when a simple debt collection goes wrong.

1995, Kamurocho. Kazuma Kiryu, the Dragon of Dojima, takes the fall for the murder of a crime boss to protect his sworn brother, Akira Nishikiyama, and his childhood friend, Yumi.

An assassination threatens to erupt an all-out war between the Tojo Clan and the Omi Alliance. Kazuma Kiryu, the Dragon of Dojima, must travel to Sotenbori, Osaka to broker peace between the rival clans, but Ryuji Goda, the Dragon of Kansai, will stop at nothing to get his war.

Available on day one with Game Pass: Matchpoint: Tennis Championships is a modern take on tennis, featuring a true-to-life on-court experience supported by a deep career mode and unique rivalry system.

On this risky road trip to the border, you’ll meet incredible characters, and discover their intertwined stories and secrets in an ever-evolving adventure. But every mile opens a choice to make.

You’ve just arrived at Escape Academy, a school where promising students train to become the ultimate Escapist. Play over a dozen masterfully hand-crafted rooms, designed by experienced experts in the field of real-life escape rooms.

You’re outnumbered, low on ammunition and the paranoia sets in. Overwhelm is an action horror-world platformer where enemies get power ups and you don’t. Explore the oppressive caverns of the hive, guided only by a sparse map.

A big city means a bigger adventure! When Ryder and the PAW Patrol learn that Mayor Humdinger has taken over a buzzing metropolis, they must race into action to save Adventure City from his selfish scheming. The pups need you to join Team PAWsome!

Available on day one with Game Pass: Release the pressure with PowerWash Simulator and wash away your worries with the soothing sounds of high-pressure water. Fire up your power washer and blast away every speck of dirt and grime you can find.

Twitter on Friday confirmed a December 2021 security breach that stole data from more than 5.4 million user accounts using a zero-day exploit — reports BleepingComputer. The hack exploited a vulnerability in the mechanism that Twitter lets users link email addresses and phone numbers to their accounts. Threat actors were able to submit an email...
Nehal Malik
21 hours ago

Apple announced this week its Maps team will be driving and walking across six Canadian cities next week. The Apple Maps team will be in Toronto, Montreal, Calgary, Vancouver, Edmonton and Ottawa from Monday, August 8, 2022. Apple says they will be “driving vehicles and wearing specialized backpacks with equipment to help us build the...
Gary Ng
23 hours ago