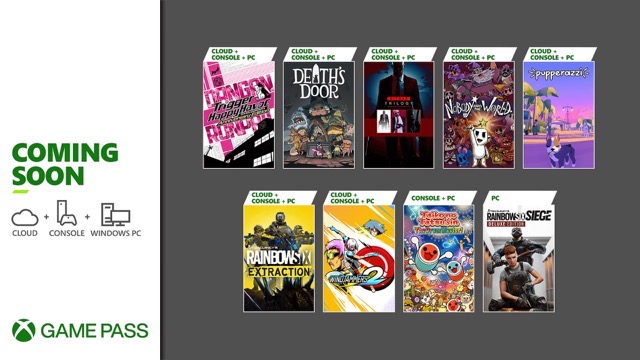 Whether you’re looking to squad up with your friends to take on a constantly evolving alien threat, become a world class assassin, or planning to brush up on your dog photography skills, Xbox Game Pass has got you covered with what’s coming in January 2022.

Reaping souls of the dead and punching a clock might get monotonous, but it’s honest work for a Crow. The job gets lively when your assigned soul is stolen, and you must track down a desperate thief to a realm untouched by death – where creatures grow far past their expiry and overflow with greed and power.

Experience the World of Assassination trilogy and become Agent 47, a legendary assassin. Embark on a globetrotting adventure, where hyper-detailed missions are packed full of creative opportunities to take down your targets.

Available on day one with Game Pass: This dog photography game puts your love for pups to the test. As you take better photos, you’ll unlock new breeds, camera lenses, chew toys, and accessories to dress up dogs with. Don’t just pet and play fetch – save your memories of those very good boys and girls on film.

Available on day one with Game Pass: Tom Clancy’s Rainbow Six Extraction is a tactical co-op FPS for 1-3 players, featuring beloved Operators from the Rainbow Six universe. With deep gear and ability progression, over 90 weapons and gadgets, 12 ever-evolving maps, unpredictable enemy mutations, and 13 dynamic mission types, no experience is ever the same.

Available on day one with Game Pass: The best flying disc game of all time is back! With amazing hand-drawn graphics, crazy new moves, gameplay mechanics and awesome new characters and stages, Windjammers 2 is the sequel you’ve been dreaming of.

Taiko no Tatsujin: The Drum Master (Console and PC) – January 27

Available on day one with Game Pass: Drum out high scores by playing along with Don and Ka in Taiko no Tatsujin: The Drum Master! Choose from over 70 songs and play with friends in local multiplayer mode and online ranked matches.